Have the Millions Spent by Energy, Resources and Environment Companies on Market Intelligence Paid Back?

July 18, 2013. Some global companies in the energy, resources and environment industries will each spend as much as US$1 million on market intelligence* in 2013. While this may appear substantial, they are however, not the biggest spenders. By comparison, some manufacturing and industrial companies may commit as much as US$130 million to market intelligence in a single year.

The answers can be found in M-Brain (formerly GIA)’s 2013 Global Market Intelligence Survey, where we compare two groups; companies in the energy and utilities sectors with 33 respondents and those the oil and gas sectors with 31 respondents, using the results from automotive companies as benchmarks. 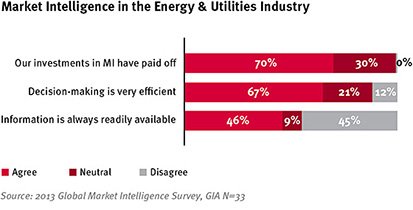 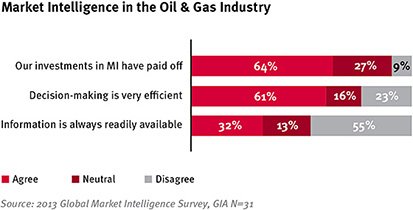 Overall, it would seem that companies in the energy and utilities sectors benefit from more efficient market intelligence capabilities than oil and gas companies. In a ranking of 20 industries in the study, the energy and utilities industry ranked 6th in terms of their market intelligence capabilities, while the oil and gas industry ranked 19th.

In addition, the cross industry comparisons in the study also shows that while executives in the media and entertainment sectors consider their market intelligence to be very advanced, placing them number one overall, the perceived return on investment (ROI) in these companies is the lowest.

The relatively low availability of business information (46% in energy and utilities and 32% in oil and gas) however, highlights the need for sophisticated market intelligence, in order for industry executives to make better-informed decisions, particularly when we compare the results with the automotive industry’s in the table above.

All in all, it appears that more can still be done to raise the market intelligence capabilities at energy, resources and environment companies to world class levels.

In June 2013 the European Commission and the U.S. government commenced negotiations for the Transatlantic Trade and Investment Partnership […]

The imperative of return on market intelligence