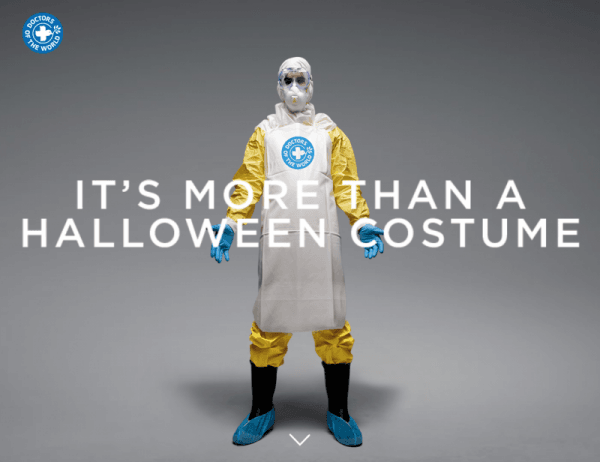 Is your new ad campaign getting you massive attention for a low price tag? Or are you spending a fortune without any visible results? Your toolbox for distinguishing marketing success from failure should include many kinds of measures, one of them being media monitoring. See how we used post-campaign measurement to find out what happened with the ebola-themed Halloween costume.

The following case study is about a campaign where media monitoring analytics measure impact better than other statistics, like sales or page views. In October 2014, BrandsOnSale, an online costume retailer, started selling an ebola-themed Halloween costume. This generated lots ill repute for the company, since it was widely considered bad taste to turn a deadly disease into a funny costume. Many people heard about BrandsOnSale for the first time during this period.

What marked the impact of this particular campaign out from others was widespread media attention. Numerous newspapers expressed disgust at the costume, and there were even reader votes on its tastelessness. A volume trend chart counting articles about BrandsOnSale in editorial media captures this special impact precisely. In this case, media monitoring is the right tool to measure that this particular costume generated almost all the editorial media attention which the company earned in October 2014.

As expected, the coverage was mainly negative in tone.

However tasteless the costume itself, the story got a happy ending when Doctors Of The World started a
campaign which turned the disrepute into ebola-fighting donations.

The above example used M-Adaptive, M-Brain’s own media monitoring tool, to gauge marketing effect with campaign-tailored measures. While campaign-specific reports show clearly the impact on consumers, allowing best conclusions, it also takes time to write them. Professionals have to constantly prioritize tasks.

Lack of time is not an excuse to skip post-campaign measuring and lose the benefits of improvement through feedback. Instead of campaign-specific measures, you can automate measuring by setting up a generic monitoring template on your company’s products, services, competitors and industry topics.

After initial set-up, you receive a report in your inbox weekly, updated with fresh data, ensuring that you’re always up to date. The report includes both qualitative charts summarizing what people talk about as well as numerical charts on how often they mention your topics of interest. The report comes in PDF format, which is easy to distribute to everyone committed to improving marketing impact.

Ask for a demo of M-Adaptive to find out how you can improve the marketing impact for your next marketing campaign and measure the impact of the following ones. Read more also our monitoring services.