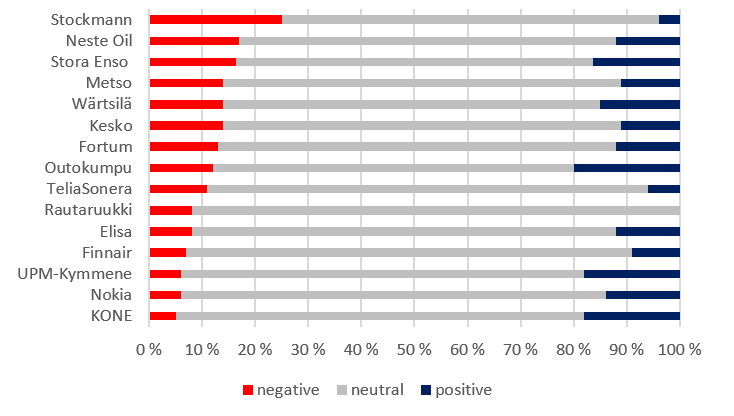 This is how media fortunes in terms of tone of publicity were spread between large Finnish actors in January-March 2015. M-Brain’s quarterly M-Index comparison surveyed publicity received by 15 large Finnish stock-listed companies.

Large Finnish stock-listed companies’ media coverage revealed that the monitored companies were more likely to feature in connection to positive, than negative financial messages. Nokia received more than twice as much media coverage as any of the other companies surveyed. After Nokia, Finnair, Stockmann, Fortum and Kesko appeared the most often in the media spotlight.

This time we decided to take a closer look at two Finnish forest industry giants, Stora Enso and UPM-Kymmene, over a longer period of time. A glimpse at UPM-Kymmene’s media coverage over a two-year period revealed that the company’s quality of publicity has been consistently good.

In seven consecutive quarterly M-Index reports, UPM-Kymmene has received more positive than negative media coverage, usually by a wide margin. The last quarter that UPM-Kymmene was subjected to more negative than positive media attention was in April-June 2013.

Not all media coverage is good coverage

Over a two-year period of eight quarters, Stora Enso has usually received more media attention than its competitor UPM-Kymmene in web publications of Helsingin Sanomat, Kauppalehti and Taloussanomat. Yet for Stora Enso, time spent under increased media scrutiny has not always meant a bed of roses. When Stora Enso has finished in the top 5 of the 15 benchmark companies in terms of the volume of media coverage, it has each time received a minimum of 20 per cent of negative media coverage out of its total publicity.

The exception to the rule of Stora Enso getting somewhat more media attention than UPM-Kymmene are the two more recent quarters when the roles have been reversed. At the same time, Stora Enso’s ratio of positive to negative coverage has been better. In this case at least, not all additional publicity has been good publicity.

M-Index is a quarterly comparison of media coverage of 15 large Finnish stock-listed companies. The metrics compared include the volume of audience reached, tone of publicity and favourable/unfavourable core messages connected with the companies. The sources for M-Index are web publications of Helsingin Sanomat, Kauppalehti and Taloussanomat.

In case You would like to know more about M-Index, You can contact Topi via e-mail: topi.laakso at m-brain.com. See also our other intelligence services.

How Media Monitoring can Improve your Content Marketing? Part 1

Listen to your audience Media monitoring is so much more than clipping articles from a newspaper, or tracking the […]

How can Media Monitoring Improve your Content Marketing? Part 2

Using an online media monitoring tool should be a key element of your marketing strategy, because it enables you […]