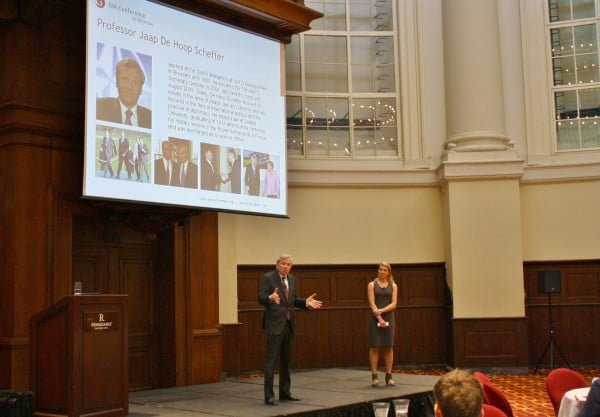 It is difficult to imagine a keynote speaker more qualified to talk about Intelligence than Jaap de Hoop Scheffer. He has served as Dutch Foreign Minister and Secretary General of NATO, and is now Professor of International Relations and the Practice of Diplomacy at Leiden University.

What is particularly fascinating about de Hoop Scheffer as a speaker, however, is not just his obvious expertise. It is how he can use his expertise to make points that are relevant to his audience.

This became apparent when de Hoop Scheffer gave his keynote presentation at M-Brain Conference (formerly GIA Conference) in Amsterdam. Titled “A World in Turmoil: Navigating the Unpredictable”, de Hoop Scheffer’s keynote offered insights into the new rise of geopolitics and the increasingly blurred distinction between internal and external threats. Yet, de Hoop Scheffer also kept his listeners’ background in mind, constantly making points applicable to the business world in general and Market Intelligence in particular.

De Hoop Scheffer particularly emphasized the growing importance of co-operation between private and public sectors. For example, business leaders have to work with lawmakers and bureaucrats to pave the way for such trade deals as TPP and TTIP.

“Make your voice heard so that there is a level playing field for your companies in all parts of the world”, de Hoop Scheffer said.

As fascinating as de Hoop Scheffer’s analysis of the current geopolitical climate was, one of his most interesting points came early in the presentation, as one of his preliminary remarks. De Hoop Scheffer told a story about how the post-war British Prime Minister Harold McMillan was once asked by a young journalist about what concerned him most in his position.

According to de Hoop Scheffer, the anecdote goes to illustrate how much unpredictability every leader faces.

“When I became NATO Secretary General, I came into my office and thought ’this is what I’m going to do with NATO’. When I became Foreign Minister I thought, ’this is the agenda I’m going to follow for the Netherlands’. But forget it. You are immediately ruled and influenced by events”, de Hoop Scheffer continued.

This unpredictability is not something only political or military leaders face. As Joop de Hoop Scheffer said, it is a part of business as well.

Learn everything about the things you can learn about

For us as Market Intelligence professionals, that is an important lesson. The fact that business leaders have to deal with a certain level of unpredictability doesn’t mean that we should throw our hands in the air and say that we can’t do anything to know more about competitors, customers, and the world around us.

It means the opposite. There will always be things we can’t know and control. That’s why we must do our best to learn everything about the things we can.

The M-Brain Conference (formerly GIA Conference) is a three-day event for professionals focusing on the key strategic success factors of Market and Competitive Intelligence. It is internationally recognized as the best intelligence conference with 100% recommendation. Why? Because the conference is characterized by in-depth workshops, practical case presentations, thought provoking panel discussions, interactive roundtable sessions and a lot of networking opportunities. And it is vendor free.

In June 2013 the European Commission and the U.S. government commenced negotiations for the Transatlantic Trade and Investment Partnership […]

The imperative of return on market intelligence