« Leaders are not born – How to become a great leader?
Nose Day achieves positive change in Finland »

Peter Palchinsky’s 3 Principles To Improve Anything – Including Marketing 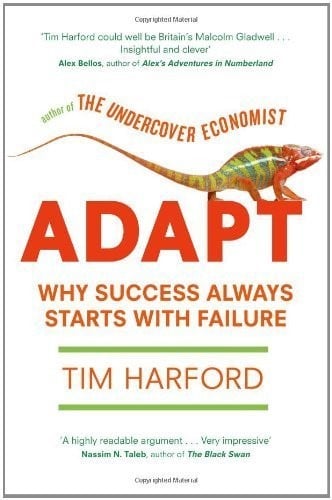 Tim Harford's book Adapt is about using trial, error and feedback to tackle problems, which are too complex for experts to solve by planning. The theory revolves around Peter Palchinsky's three industrial design principles:

When seeing the designs for the Dnieper Dam on Dnieper river, Peter Palchinsky recommended building a series of smaller dams and coal-fired plants instead of one big dam. This would provide opportunity to learn from issues with the early dams, to variate plant designs and to select those that best serve local electrification efforts, providing power and water control capacity closer to the points of use with a smaller flood plain. The local electrification drive would survive abandoning a small dam. Unfortunately, during the Second World War, the Dnieper Dam proved unsurvivable for the tens of thousands of people who drowned when it was demolished by retreating Soviet forces.

While planned economies suffered, market economies and evolution benefited from following the Palchinsky principles. Markets have many competing producers, which create a varying supply. The failure of a single product is survivable for the economy and even for most companies. The best ways to produce will win a dominant market share. In evolution, the fittest genetic variants get selected to the next generation, while the species survives a single organism’s failure to reproduce.

Consulting the best available expert does not substitute variation, selection and feedback. Based on facts alone, several business plans may sound equally plausible. Once an expertly designed product hits the market, however, customers start using it differently than originally envisioned – ”The street finds its own use for things”, as William Gibson said.

As sales picks up, development efforts focus on adapting the product to serve actual customer needs – and they, too, shift as technology and regulations change. No amount of design skill will remove the need to learn from feedback. Each sale or justified refusal to buy is valuable feedback from outside the organization.

To “adapt” does not mean that you just passively witness adaptation but that you consciously improve your organization by using the Palchinsky principles. One way of creating small-scale variation, presented by Harford in his book, is by decentralizing autonomy and letting local units decide on how to develop products, stock shelves and promote offerings.

To benefit from variation, also selection must be facilitated with financial transparency for local actors to distinguish good choices from bad ones. This way, the company loses some economies of scale but gains the ability to learn from feedback faster.

When your campaign is active, a monitoring tool keeps track of how people talk about your company and offering. Sales figures and web analytics tell quantitatively how much attention you are getting. You might also utilize human analysts to get customized monitoring dashboard or more detailed tailored analysis.

Offering up-to-date regular information on the progress of your campaigns and activities to the whole marketing organization will enable a feedback loop covering both the qualitative and the quantitative side. And in the end, it will allow professionals to select the methods that make the biggest splash.

How much to budget for marketing improvement?

Marketing accrues sales. Marketing improvements pay off, if the profits from increased sales surpass the costs of improvement measures. […]