« The importance of valid and real-time information in decision-making
Skills and Competences for Intelligence Professionals Part 2: Competencies »

Q2 analysis of large Finnish companies: growth for Nokia, at least in terms of media coverage 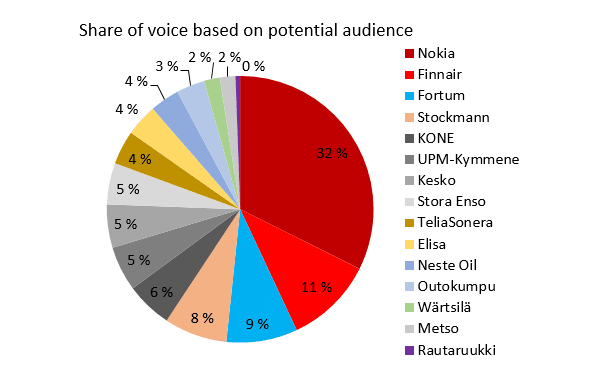 Nokia was the only major Finnish stocklisted company to increase its media visibility during April-June on account of the acquisition of Alcatel-Lucent. M-Index is a quarterly comparison of media coverage of 15 large Finnish stock-listed companies.

Among large Finnish stocklisted companies, Nokia was the only company to significantly increase its volume of media coverage in April-June, compared to January-March. Finnair’s volume of coverage was at the level of Q1, while Fortum and Stockmann changed their respective places at 3rd and 4th, seeing a slight decrease in their amount of publicity.

The rise in Nokia’s media presence was explained by news of Nokia’s acquisition of its competitor Alcatel-Lucent in an all-stock deal, likely to be closed in the first half of next year. The combined entity will become the second largest mobile equipment manufacturer in the world, close behind Swedish giant Ericsson.

Media reactions to Alcatel-Lucent deal were split, with comments positive towards Nokia somewhat more common than those negative to the company. President of Finland Sauli Niinistö hoped that the acquisition would result in new growth for Nokia, especially in Finland. Following the deal, credit institution Standard & Poor’s raised Nokia’s long-term corporate credit rating. Nokia’s CEO Rajeev Suri believed the company is now in a position to be number one or number two in every key business line it operates in.

Meanwhile, doubters pointed to risks and uncertainties of the deal, as well as to difficulties in finding synergies. The media also reported fears of Nokia’s employees in Finland regarding possible redundancies.

Continued rumours about the sale of Nokia’s Here mapping technology added to Nokia’s volume of coverage in the period, with potential buyers as diverse as Baidu, Facebook, Uber and a consortium of car makers BMW, Audi and Daimler mentioned in the media. This week Nokia revealed the consortium of German car makers as the eventual buyers of Here for a sum of 2.8 billion euros.

Neste Oil: a turn for the better

In terms of the tone of media coverage, Neste Oil and KONE emerged as top performers in Q2. Neste Oil issued a positive profit warning, and analysts of Citigroup and Evli praised the company’s Q1 performance as strong, with promising prospects. Neste Oil’s share of positive media publicity more than doubled from the last quarter, while there was a corresponding drop in the share of negative media publicity.

In addition to Neste Oil, Stora Enso received favourable attention in financials, while for Stockmann and Outokumpu, financial news were bleak.

M-Index is a quarterly comparison of media coverage of 15 large Finnish stock-listed companies. The metrics compared include potential volume of audience reached, tone of publicity and favourable/unfavourable core messages connected with the companies. The sources for M-Index are web publications of Helsingin Sanomat, Kauppalehti and Taloussanomat.

In case You would like to know more about M-Index or competitor analysis in general, You can contact Topi via e-mail: topi.laakso at m-brain.com. Read more about our media analysis solutions.