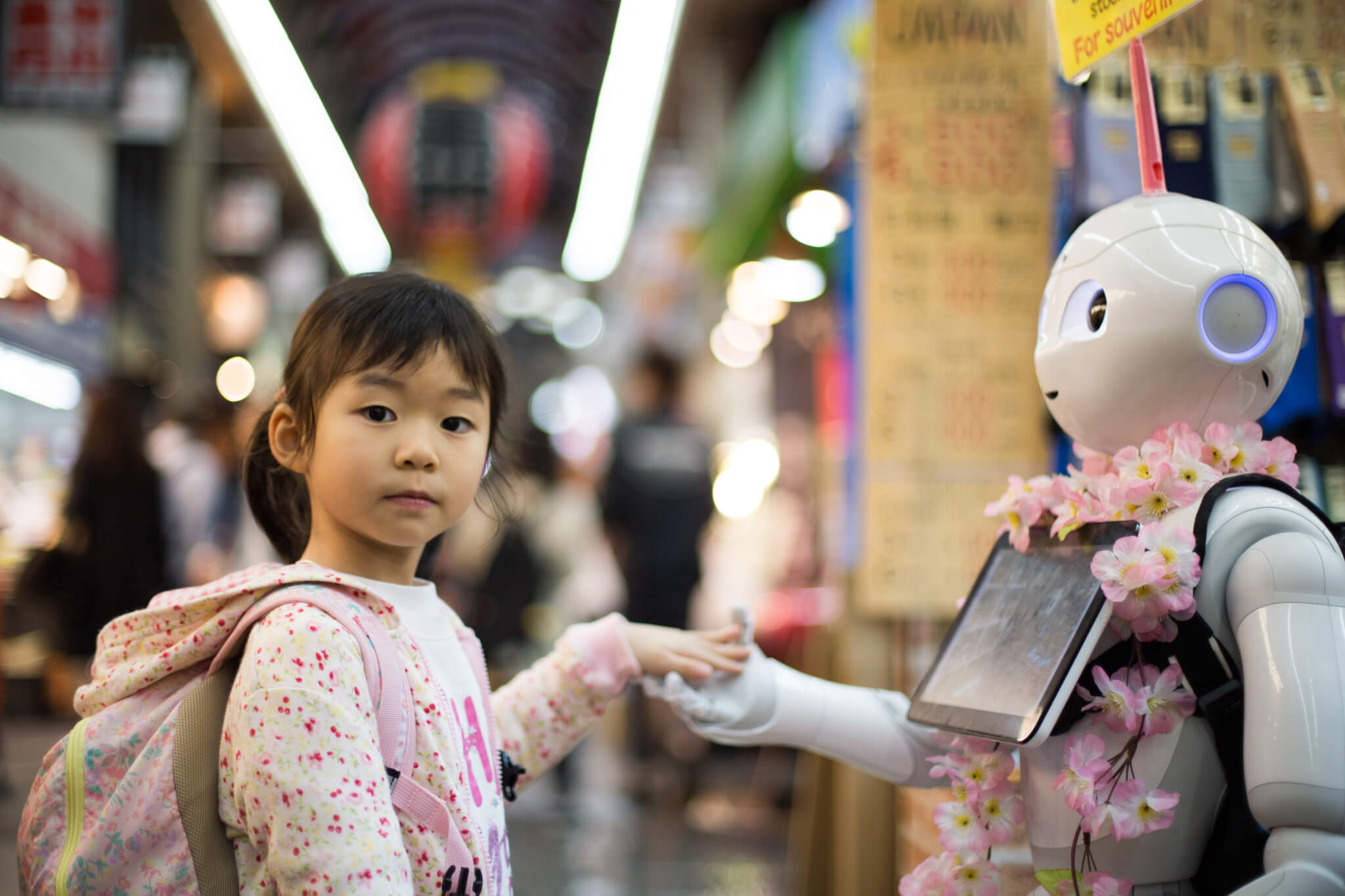 In our first monthly Industry Insights series, we take a closer look at the theme of robotics in the context of Southeast Asia. We will begin by introducing the interdisciplinary branch of robotics and placing it in the Southeast Asian context, using external media sources for information. The main part of the text focuses on the latest developments in the regional robotics powerhouses of China, South Korea, Singapore, Japan and Thailand. News on robotics, provided by M-Brain’s Industry Insights service, is used as a material.

Robots in space, robots underwater and robots helping the elderly

In its article on robot technology, tech site Built In defines robotics as an interdisciplinary section of science and engineering dedicated to the design, construction and use of mechanical robots. The notion of what is understood as robotics has expanded drastically from 2005 when 90 per cent of all robots were used in assembling cars in automotive factories, using mechanical arms as help. Today, robotics includes the use of bots that explore the Earth’s harshest conditions, robots that help in fighting forest fires, robots that offers companionship to senior citizens, robots used in food order delivery, as well as robots used in various facets of healthcare, e.g. as surgical assistants.

Despite this expansion of the notion of robotics, a robot still has some key characteristics. According to Built In, all robots have a mechanical part helping them to complete tasks in the environment for which they were designed. Robots also need electrical components. Batteries help power a large majority of robots. There also needs to be at least a certain level of computer programming, a code to tell robots when and how to carry out a task.

Wikipedia’s lengthy article on robotics is helpful for understanding the array of applications that robots have today. Robots are often used in dangerous environments such as in bomb detection, manufacturing processes, in extreme heat, space, under water or cleaning of radioactive materials. More and more robots are designed with specific tasks in mind. Examples of current and potential applications include military robots, industrial robots, agricultural robots, medical robots, robots used in kitchen automation and, more leisurely, robots engaged in combat sport aiming to disable each other.

Technology Review’s article illustrates well the dominant position that Southeast Asian nations have when it comes to robotics adoption. The most common measure for this, used by the International Federation of Robotics (IFR), is the number of industrial robots per 10 000 manufacturing workers in the country. The global average in 2017 was 85 robots per 10 000 workers. South Korea topped the list with 710 robots per 10 000 workers, followed by Singapore’s 658 and Germany’s 322.

When measured by the sheer number of robots, Asia Pacific accounts for 65 per cent of the world’s total industrial robot usage, this according to Tech Wire Asia which refers to an IMF report. China deploys about half of the region’s robots and is followed by South Korea and Japan. As for robot production, Japan is the world’s top producer, making over half of the world’s robots.

When adjusted for wages, the dominance of Southeast Asia in robot adoption is even more striking. In other words, the countries of the region have made more progress in robot adoption than their wage level would suggest. According to Tech Republic, the decision to use robots typically depends on the cost of funding the technology versus funding a human worker’s salary. Using a compensation-adjusted scale, South Korea is number one in robotics adoption, followed by Singapore, Thailand, China and Taiwan.

Looking merely at the volume of robotics-related news in the Southeast Asian nations, it is China and Japan that emerge as the biggest actors. Of course, hardly any text these days comes without reference to the coronavirus. The Soeul Medical Center in South Korea has deployed three types of robots to support treatment for coronavirus patients, a Taiwanese company has deployed two disinfection robots and a telecommunications company in Thailand uses medical robots that have their capabilities augmented by fifth-generational (5G) service.

In China, robots, online medical services and virtual clinics have significantly strengthened the healthcare services amid the virus outbreak. Robots are used to deliver food to avoid close human-to-human contact during lunch queues. Other robots are equipped with functions to detect if passers-by are wearing a mask and check their body temperatures, while yet others have interactive screens to provide guidance to patients and promote awareness about epidemic prevention among the public.

Overall, the projects undertaken in different countries of the southeast region often reflect the particular challenges the countries face, as well as their culture. In Japan’s Fukushima Prefecture, robots have been used in disaster-response tests of houses. Toshiba has developed a robot designed to survey the interior of the three damaged reactors at the Fukushima nuclear power plant. In Kodaiji temple in Kyoto, a robot is being used to promote interest in Buddhism. The humanoid robot named Mindar measures 1,95 meters in height, weighs 60 kilograms and preaches Buddhist sermon. The hope is that the robot priest will appeal to younger generations. And there are table tennis robots as well, naturally.

We will examine in more detail the three countries at the top of the wage-adjusted scale. What insights can we get from the news in robotics related to South Korea, Singapore and Thailand in 2019 and 2020? Which are the key areas that these bellwether countries are focusing on?

South Korea: rising up to the challenge of a hyper-aging society

South Korea is targeting to become the fourth largest player in the global robot industry, as measured by the market size in 2023. By acquiring core technologies for robots, the country also hopes to lower its dependency on other advanced nations such as Japan and the US. To push growth, South Korea intends to have more robots applied in the service sector. Prominent areas there include wearables, logistics, healthcare and elderly care.

South Korea is to become a hyper-aging society in 2026, defined as a population with over 20 per cent of individuals aged 65 or older. In preparation for this, the government is planning to deploy 5 000 robots for elderly care, performing tasks such as physical support, surgery and dementia care. It is not only the elderly though that the robots are expected to help. At hospitals’ children’s ward, emotional support will be available to small patients from the robots. The robots will be able to play videos, music, audio books and games.

In other areas, startups specializing in robotics and artificial intelligence (AI) have ventured into the pet industry with relevant products. AI-powered pet fitness robots take care of pets at home when owners are away, while urine test kits for pets allow for checking over ten types of diseases. The South Korean government also hopes to obtain key technologies such as robotic arms and artificial limbs that can raise human ability and strength. Another key area is food: examples here include cooking robots, robots that are able to deliver food directly to clients at their houses, and robot chefs in charge of cooking a wide range of noodles in not more than one minute, as soon as they receive information of the ingredients selected by clients.

Finally, the military has a large role planned for robots in its future endeavors. The development of various cutting-edge biomimetic robots that will take up essential roles in the national defence is being considered in the military blueprints. These would come in the form of animals, such as fish, snakes, pigeons, butterflies and lobsters. South Korea also has a robot response system for nuclear accidents on its agenda, to be created by 2021.

In Singapore, a national research fund was established already in 2016 to allow considerable investments for R&D in the fields of supercomputers, robotics and AI. Medicine and food are among the key industries that the country is focusing on. Investments include scaling up cell manufacturing capabilities for cell therapy, as well as food research including lab-grown meat and urban farming.

Thailand: successfully punching above her weight

Thailand is an interesting case with an ambitious program for future digital workforce. Its robotics adoption rates are 159 per cent higher than its wage levels would suggest, according to Information Technology and Innovation Foundation, ITIF. The country faces a lot of the same problems as South Korea: its government needs to solve economic issues amid ageing community. As a solution, the government is increasing spending to employ artificial intelligence in services and production and to increase robotics in plants. Thailand also co-operates with larger regional actors such as Japan and benefits from this in the form of, for instance, soft loans and tax deductions.

The International Federation of Robotics has predicted a growth rate for Thailand’s automation and robotics sector that corresponds to the fourth largest growth rate across the globe and the highest in Association of Southeast Asian Nations (Asean). According to the Thai government, there is a need to increase workforce productivity to save the economy in 4.0 era. The government is targeting 12 sectors of the economy for which the combined demand for human resources will surpass 1 million by the year 2030. Tourism industry is expected to see the biggest growth, followed by the digital industry, while robotics, medical and logistics sectors are also expecting around 100 000 new workers each.

Fitting human into the equation

Tech Wire Asia considers the impact of robotics and automation in Asia as something that is changing the business landscape. Progress and growth are further accelerated by digital technologies, such as advancements in computing power and developments in technologies like artificial intelligence and data analytics. These have enabled robots to take over complex workloads that used to be undertaken by humans.

However, despite all the progress that the nations of Southeast Asia are making, challenges remain. Tech Wire Asia points out that the education system in Asia hasn’t caught up with the changes brought by automation and robotics. For the digital-driven model to succeed, the education system needs to keep up, and Southeast Asian need to invest in innovations that support the co-existence of robots and humans.

For the low skilled workers, automation presents a threat. Digitalization is vital for the region’s economy, but it brings social challenges with it. Job seekers need to be supported and equipped with competitive skills in the changing economy. According to Tech Wire Asia, the key is for the governments to empower their people so that they are able to further drive the change.

Contact us at M-Brain to hear more about Industry Insights and other services!