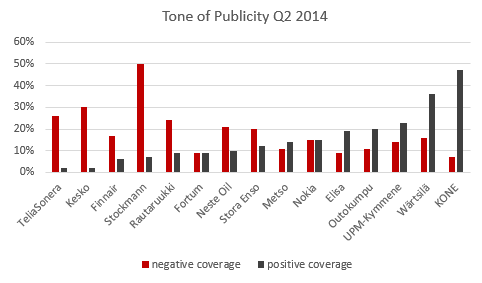 When reporting about the results of M-Index, we have usually started with a phrase along these lines: KONE emerged as the top performer once again. Taking a look at the quality of media publicity of large Finnish companies in April-June 2014, this would have been a perfectly legitimate opening, once again. This is why we looked at KONE’s publicity over a longer period of time, from April 2013 to June 2014. What kind of topics have explained KONE’s favourable media coverage over time? Have there been fluctuations in the quality of publicity?

In the five tracking quarters that we looked at, out of KONE’s total publicity, the share of negative hits has been seven per cent at its highest. The figure is considerably lower than that of the benchmark companies tracked. The share of positive publicity for KONE has ranged from 33 per cent to 53 per cent, standing at 47 per cent in April-June 2014. By any standards and comparisons, these figures can be described as excellent.

Similarly, KONE’s average Attention Score, describing both the quality and noticeability of media coverage, has varied from a good level of 23 per cent in Q4/2013 to an excellent 34 per cent in Q3/2013, and equalling 28 per cent in April-June 2014.

KONE gets a good spread of positive topics in the media

For any company or organization, to benchmark their own media performance against their most significant competitors is important. It also makes a difference to know in which context the company itself comes across in the media. For instance, how much does a certain business unit account for in the company’s total media coverage? Is the share of favourable publicity for that business unit in line with expectations? Does the company manage to get its messages through when it comes to products and services of the business unit in question?

For the purposes of M-Index, we have used a fairly simple topic categorization. Looking at KONE’s media performance in the surveyed 15-month period, 50 per cent of the company’s favourable publicity has been connected with financials. Majority of the remaining positive coverage is explained, in equal parts, by corporate news, products and services, and management.

Management is often a target of criticism in the media, but for KONE the share of positive news related to its upper echelons has been commendable. In the most recent tracking period, KONE was reported to have won several significant orders ““ these included projects in Saudi-Arabia’s Jedda, Malesia and Istanbul. News of an increase in profit and turnover in the first quarter, exceeding analyst expectations, also resulted in positive coverage.

And what have the other companies been up to in April-June?

In addition to KONE, Wärtsilä, UPM-Kymmene, Outokumpu and Elisa performed reasonably well in the media in Q2. Each of these companies received about one fifth or more of positive publicity out of their total media coverage.

Stockmann continued to face the tide of negative media attention, with half of the publicity in Q2 negative. Kesko and TeliaSonera were subjected to a fairly large share of negative coverage and very little of positive coverage, while the trend in the quality of publicity turned for the worse for Neste Oil and Rautaruukki.

M-Index is a quarterly comparison of media coverage of 15 large Finnish stock-listed companies. The metrics compared include the volume of audience reached, tone of publicity, average Attention Score and favourable/unfavourable core messages connected with the companies. The sources for M-Index are web publications of Helsingin Sanomat, Kauppalehti and Taloussanomat.

The major league Based on the media coverage in Q3, new-look Nokia seems to have been able to turn focus […]

In the final quarter of 2014, Nokia received the biggest volume of coverage, about twice the volume received by […]