May 3, 2013. While the Asia Pacific region is expected to weather the global economic cold winds better than Europe or North America, the 2013-14 business outlook varies for different countries.

Analysis shows eight out the 14 countries from M-Brain (formerly GIA)’s 2007 Asia Weather Report grew faster in 2012 than they did in 2007. Those with higher GDP growth rates last year were Australia, China, Indonesia, Japan, New Zealand, Philippines, Thailand and Vietnam. 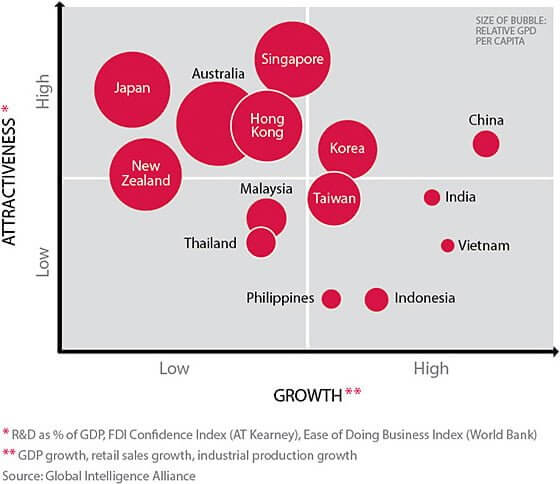 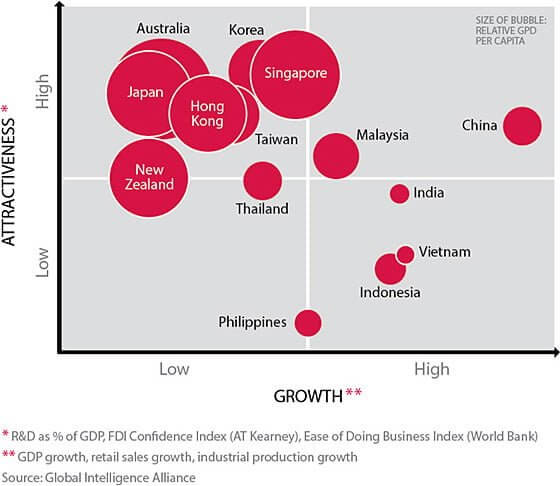 Why was this so? What is the outlook for 2013-14? M-Brain (formerly GIA)’s Asia Pacific business unit directors give their assessments with a business “weather report”.

“China’s GDP growth fell from 14.2% in 2007 to 7.8% in 2012 due to sluggish exports, investments and domestic consumption. Additionally, slow recovery in the US and financial crisis in Europe is hampering China’s trade.

Concerns about real-estate and infrastructure investments have been worsened by declining rates of ROI. China will have to focus on stabilizing growth while restructuring and upgrading industrially to increase productivity, while encouraging increased consumer spending.”

2013-14 BUSINESS WEATHER ““ CHINA: Bright and promising, with patches of clouds.

“The real Southeast Asian success story in recent years is Indonesia, where foreign investment hit new records in 2012. Thanks to a relatively stable political and currency situation compared to that of recent decades, and despite confusing and sometimes contradictory regulations at different levels and in different sectors, foreign companies are seeking to make the most of the huge population, strongly emerging middle class and wealth of natural resources in the country. There also exists the promise of much potential in Myanmar since the regime relaxed its restrictive grip in 2011, but while the latent demand for all sorts of products and services created by decades of isolation is undeniable, tapping into this potential remains uncertain and risky.

Confidence in Thailand has picked up since political troubles tailed off in 2010, bringing an end to several years of virtual stagnation in tourism, one of the mainstays of the economy. Inward investment has followed more slowly, though an increase was registered in 2012.

Malaysia continues to benefit from improvements in infrastructure and an ambitious government, as well its interest and investment in technology, all of which are making it easier for foreign companies to do business there.

When ranked against other Southeast Asian countries on manufacturing or R&D, the Philippines looks weak, however its recent rapid advances as an international service economy to challenge India’s dominance in call centres and BPO have served it well and helped to boost growth.”

“Countries such as Taiwan and South Korea have seen slower GDP growth in recent years, but managed to improve their ranking in The World Bank’s Ease of Doing Business index. Taiwan went from no. 61 out of 185 countries in 2009 to no. 16 in this year’s ranking. Their rankings have improved mainly through local reforms making it easier for domestic and medium sized firms to set up businesses, reducing the tax burden on companies and protecting investors.”

“While Australia represents the largest GDP per capita in Asia, its GDP growth is below the mid point of Asian countries. This can be in part attributed to being the lowest ranking of the 14 countries, and New Zealand second lowest, in terms of retail sales growth.

While the Industrial Production growth rate for Australia was above mid-point of the Low-High range, it was the third lowest growth rate across the 14 countries. These factors combined appear the reason why Australia is deeper into the top left quadrant verses 2007.

Australia experienced a ‘two-speed’ economy in 2012. The mining boom driving GDP growth (and a higher dollar) contrasted against the rest of the economy that was relatively flat, with weakening retail sales growth and industrial production data.”