July 5, 2013. Japan’s New Growth Strategy, laid out by the Abe government, consists of 21 national strategic projects in seven potential growth areas. It sets a target of 3% nominal and 2% real economic growth by 2020. The plan calls for generating new markets totaling 120 trillion yen and roughly 5 million new jobs by 2020 in energy and environment healthcare, tourism and overseas projects across Asia.

What are the opportunities for foreign companies to benefit from these reforms? How can companies tie up with Japanese companies? Is Japan an easier place to do business today than five to 10 years ago? We ask Takao Fujishiro from McRBC, the M-Brain (formerly GIA) Member based in Tokyo, Japan, for his thoughts.

What opportunities does the New Growth Strategy create for overseas investors?

Hopes are high that opportunities will increase for business and technological collaboration with foreign corporations and foreign investors that are already active in global markets related to the sectors highlighted in the New Growth Strategy, covering both the hardware and software dimensions. As domestic demand tapers off, more and more Japanese companies are expected to expand into foreign markets. This could increase opportunities for collaboration with small and medium-size Japanese companies that have technological assets, but hesitate to go it alone in setting up overseas operations.

We believe there are likely to be increased opportunities for business tie-ups and M&A activity in overseas markets related to advanced technology and other product/parts technology involving both the hardware and software dimensions.

Until now, the marketing strategies of Japanese companies have focused on sales to developed economies (primarily Europe and US) of high-performance, high-end products designed to deliver value added, but with these markets now maturing, Japanese companies need to capture market share in rapidly growing emerging economies if they are to maintain a strong global presence. This has prompted companies to pay greater attention to the needs and values of newly emerging markets in their product-development programs. Some of these products have turned into hit products in developed markets, reflecting the reverse innovation phenomenon. Here again we see opportunities for dynamic market intelligence across global markets.

In the US, the Lehman collapse ushered in a period of so-called mancession in Japan, in which job losses among males exceeded those among females. The globalization of the economy and shrinking birth rate were contributing factors. In Japan 3.1 million jobs were lost, mainly in the manufacturing and construction sectors, in the 14 years from 1997 to 2011, with males accounting for 91% of the total. By contrast, the percentage of women employed in medical and social welfare-related services has increased.

As women achieve a stronger presence in general occupations and management, the markets for products that are popular among women continue to grow steadily. These categories can be regarded as having strong market potential.

What is Japan like as a place to do business in?

According to a study by Japan’s Ministry of Economy, Trade and Industry in 2011, the biggest appeal for companies operating in Japan relates to the business environment and how it has large number of relatively high-income customers for products and services. Roughly half of companies in the study also identified its well-developed infrastructure and its sensitivity to trends as attractive factors. 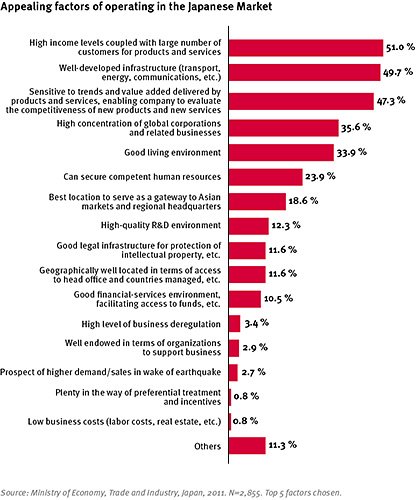 On the other hand, the number one barrier to doing business in Japan is the high cost; ranging from high labor costs (67%), taxes (62%), office rents (41%) and logistics costs (23%).The closed Japanese market, difficulties in securing good human resources as well as the high standards demanded by consumers were also mentioned as hindrances.

How do most overseas companies partner with Japanese companies?

In the Ministry of Economy, Trade and Industry study, it appears that the largest percentage had partnered with one company, followed by those who partnered with 2-4 companies, 5-9 companies and 10 or more companies respectively. The most-often cited benefit of partnering with a Japanese company was that it “facilitated entry into Japanese market” (27%). This was followed by helping to “stabilize/expand the business” (25%) and “make use of the Japanese partner’s human/business network” (22%).

In your opinion, has the Euro crisis affected the Japanese market?

The direct financial damage to Japan resulting from the euro crisis was relatively mild. Japan’s fiscal situation, however, has deteriorated to an unparalleled level, and if the markets start to doubt Japan’s ability to repay its national debt, no one should be surprised at the crisis that would ensue. Some observers argue that fiscal reforms are unnecessary because 95% of government bonds are held by Japanese. There are several problems with this view, however.

First, the gross amount of outstanding Japanese government bonds (JGBs) has now reached 1,000 trillion yen (USD10 trillion). Although 95% of this total has been purchased by Japanese, there is no guarantee they will continue their purchases, and no prospect of a reduction in the amount of outstanding JGBs. Gross financial assets owned by Japanese are said to total 1,450 trillion yen (USD14.5 trillion), but of this total, 400 trillion yen is in the form of home mortgages and other loans. To enable Japanese to continue purchasing newly issued JGBs, there will have to be an increase in personal assets. This will necessitate reforms designed to reactivate the economy.

Second, there is a high risk of JGBs being sold off. If, for example, certain holders of JGBs start selling them for some reason, it is conceivable that other holders would feel compelled to sell their bonds in order to protect the value of their assets. Alternatively, if the economy recovers and interest rates rise, the availability of more attractive investments would reduce the motivation of Japanese to buy JGBs. To encourage investment in JGBs, there would have to be an increase in yields, but this would further complicate the task of repaying the debt, possibly causing investors to shun JGBs.

Third, and most importantly, Japan has to improve its international competitiveness. If high-caliber, diligent Japanese feel they have to emigrate in order to find meaningful work, who is going to bear the social security costs of the people who remain in Japan? Without export-competitive industries, Japan will have to pay more to overseas countries while its borrowings from abroad will increase, further aggravating its problems. All payments by the government would stop, resulting in misery and social unrest throughout the country of a scale that would make the televised scenes of riots and homelessness in Athens pale by comparison.

Japan, therefore, faces the urgent task of eliminating job market rigidity and creating an environment to foster new industries and facilitate the entry of new players into existing industries. This is especially important for Japan’s younger generation. Japan needs to see changes in governance to ensure that the voices of the younger generation are reflected in government policy.