Northern European Companies Use Market Intelligence Most Widely, But Lag Behind Other Regions In Sophistication

December 2, 2009. The global economic downturn hit Northern Europe hard. Companies have had to focus and prioritize, and while doing so, to think about what Market Intelligence is absolutely vital, why, when, and to whom. This crisis however, may help rise the level of sophistication to match other developed regions, according to the Global Market Intelligence survey.

According to the 2009 Global Market Intelligence* Survey by M-Brain (formerly Global Intelligence Alliance), in which 79 respondents from Denmark, Finland, Norway and Sweden answered wide-ranging questions on the topic, the region will continue to be a tough marketplace to navigate without more targeted MI activities. (The total number of responses globally reached 724.)

The survey results also suggest that almost every company in the region sometimes makes key business decisions without the support of proper Market Intelligence. Therefore, the need for further integration of MI operations within organizational processes is clear. Less than 6% of the survey respondents were “˜extremely satisfied’ with the linkage between MI and processes such as strategic planning, sales & marketing, innovation or supply chain management.

This comment may indicate that companies in the region struggle to allocate sufficient resources to their MI operations, which have to cater to such a wide array of needs. Only 18% of respondents from Northern Europe rated their company as advanced in that dimension. Interestingly, in Western Europe and North America respondents were more positive in this matter, since as much as 40% thought their company was advanced in this particular dimension.

Most companies set their annual Market Intelligence budgets at USD 140,000
Approximately 75% of the North European respondents said that their company was spending more than USD 140,000 on MI every year. This is slightly more than the global average, which stands at 69%, but is quite consistent with responses from other advanced markets like Western Europe or North America.

However, only 12% of respondents from Northern Europe said that their company spent more than USD 1.4 million a year on such activities, significantly less than in other advanced markets. This can probably be explained by the fact that companies in Northern Europe are relatively smaller, leading to lower levels of MI spending monetary wise.

Despite difficult economic conditions, MI budgets are preserved
All together, 92% of survey respondents from Northern Europe anticipate MI investment to either increase or to be kept the same. Over half of the respondents in the region said that their company had already increased its focus on MI despite the current economic downturn.

This quite clearly shows that under the current challenging circumstances, MI operations are getting even more important in Northern Europe. 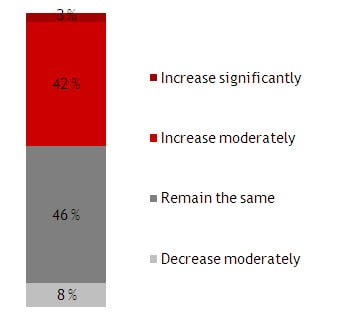 Heavy industries will be increasing their focus and spending on MI in 2010-2011
At the industry level, MI investment is expected to receive special focus in heavy industries – a sector that has been hit particularly hard by the economic downturn and the subsequent fall in capital expenditure.

More than half of the respondents from the Manufacturing and Industrial sectors said that they expected their MI budget to increase within the next two years. Other respondents with the same sentiment include those from the Energy and Environment, Chemicals and Automotive sectors.

* Market Intelligence or MI is the discipline where organizations systematically gather, process and analyze information from their operating environment to facilitate decision-making