August 1, 2013. Some global companies in the automotive industry will spend as much as US$50 million on market intelligence* in 2013. While this may appear substantial, they are however, not the biggest spenders. By comparison, some manufacturing and industrial companies may commit as much as US$130 million to market intelligence in a single year.

In M-Brain (formerly GIA)’s 2013 Global Market Intelligence Survey which involved over 1,200 respondents who responded to an online questionnaire earlier this year, 37 first- to third-tier car marque companies, automotive OEMs and suppliers revealed that; 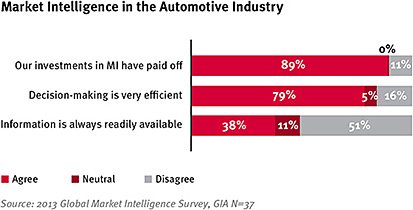 All in all, it appears that more can still be done to raise the market intelligence capabilities at automotive companies.

To rise above the competition, auto executives can look to how global companies with world class market intelligence have performed.