April 23, 2009. Telematics - the integrated use of telecommunications and informatics in cars and trucks - in the Asia Pacific region has enjoyed considerable growth in recent years, thanks in part to the region's relatively high vehicle density compared with Europe and the US.

For telematics providers, Japan is the most attractive market in Asia, given that it has the largest vehicle production base in Asia, a tradition of rapid IT adoption, and the highest ICT consumption as a percentage of GDP in Asia. 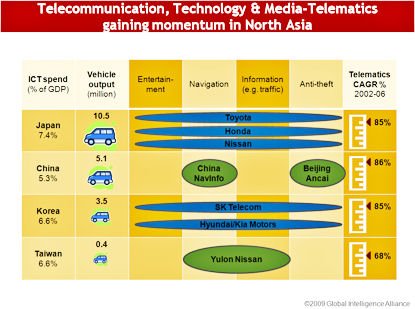 Long-term, China’s telematics market has most potential given the rapid vehicle production growth and sheer size. It is expected that by 2010, China will be the second largest vehicle market in the world, behind only the US.

Our view is that future telematics applications will be more networked, allowing for vehicle-to-vehicle and vehicle-to-infrastructure communications and operating on programmable in-vehicle units. This will lay the foundations for a huge new market in chargeable services, much like the evolution of the mobile phone.

Working with the right set of local technology, distribution and content partners is a vital success factor for any telematics market contender. And the need to heed local preferences and cultural subtleties for both product and content offerings should not be underestimated.