Select language
Contact us
Privacy
M-Adaptive
Intelligence Plaza
« Russia, One Year After WTO Accession
Will US$100 Million Generate High ROI for Pharmaceuticals and Healthcare Companies in Their Market Intelligence? »

According to M-Brain (formerly GIA)’s 2013 Global Market Intelligence Survey, in which 52 respondents from the chemicals industry responded to an online questionnaire in early 2013 that involved a total of over 1,200 respondents; 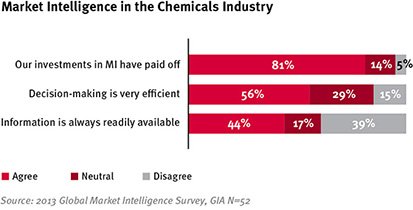 It appears that more can still be done to raise the market intelligence capabilities at chemical companies to world class levels.