May 24, 2010. India has one of the fastest growing and most environmentally aware construction industries in the world. M-Brain (formerly GIA) research during Jan-Apr 2010 shows that local opinion leaders in India’s architectural, construction and property development community are unanimous in the view that their industry is big on going Green. However, lack of awareness and education are the two major restraints, aside from cost, on environmentally friendly property development.

Compared with Australia, Taiwan or Australia for example, India stands out in its focus on green building and construction practices. Australian and Taiwanese industry players have chosen water treatment as the main thrust of their countries’ green efforts, while companies in Japan are more focused on the industrial and energy sectors.

Chart: Big on Green in India 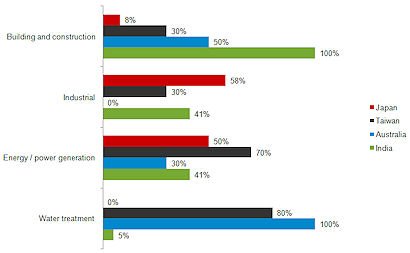 India began with a green property footprint of just 20,000 square feet in 2001. As of January 2010 it had about 490 green buildings, comprising over 330 million square feet. Some analysts project the market potential for green building material and technologies could grow to US$40 billion by 2012.

Numerous tax benefits, lower loan interest rates and other financial incentives are on offer to developers of green buildings in India, in addition to assistance from green industry groups, regulations and codes.

The Indian Green Building Council (IGBC) for example, was formed in 2001 to drive market transformation in green building concepts, materials and technologies. It comprises a wide cross-section of industry stakeholders, including corporate, government, nodal agencies, architects, designers, institutions, builders and developers, product manufacturers, suppliers and facility managers. The IGBC defines a green building as one which uses less energy, water and natural resources, creates less waste and is healthier for the people living or working inside compared with a standard building.

The Green Building Code in India however, is actually a medley of other codes and standards. The Leadership in Energy and Environmental Design ““ India ratings program, the National Building Code, the Energy Conservation Building Code and the standards and guidelines set for the Residential Sector by the IGBC are just some examples.

This confusion of codes could be one potential barrier that inhibits India’s architectural and construction industry going green at a faster pace.

While the perception of higher costs is a commonly cited deterrent to the adoption of green practices throughout Asia, Indian construction industry opinion leaders say lack of awareness is an equally major hindrance, followed by lack of education and knowledge transfer.

International players touting their green building materials and technologies in the construction and property development industry in India will be well advised to package their sales programs alongside educational programs.

Localization is another important factor. India’s extreme environmental conditions, resources and indigenous materials are radically different from those found in the West.

The most well-informed and culturally sensitive companies may even be able to call upon India’s legacy of environment-friendly construction techniques for innovative ideas and practices and combine them with modern resources, designs and materials.