January 12, 2011. Partly supported by third-party certification programs such as Leadership in Energy and Environmental Design (LEED), awareness of energy efficient and environmentally friendly products and techniques in construction is increasing. More green products and projects are likely to be introduced over the next two years.

Based on an Industry poll amongst 32 construction and property development companies by M-Brain (formerly Global Intelligence Alliance) in November 2010, respondents say they see Emerging Markets, Power Efficiency and Green Materials/Technology as the top three areas of growth over the next two years. Respondents ranged from cement and steel companies to manufacturers of lighting, elevators and furniture in Europe, North America and Asia.

Strong levels of growth are expected in emerging markets in 2011-12. According to the World Economic Outlook published by the International Monetary Fund in October 2010, emerging economies are expected to see real GDP growth of almost 7% while advanced countries are expected to grow at around 2% this year.

Not surprisingly, 60% of the respondents expect emerging economies to help drive annual growth of as much as 10-20%. Caterpillar Inc. has been busy investing in new acquisitions in order to boost sales to emerging markets for example. 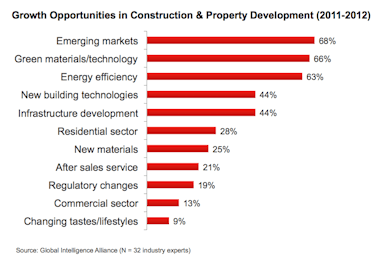 The industry is being driven by trends in power conservation, usage of non-toxic or recycled materials and reduction in wastage of water. Advances include energy-efficient lighting, solar power designs, efficient heating and cooling systems, high-grade insulation, low flow toilets and air-cooled equipment instead of water-cooling.

Homes rather than offices

Twice as many preferred to target the residential sector (28%) rather than the commercial sector (13%).

Players in the west concerned with competition, economic stability

The top 3 challenges in the coming year named by respondents were competitive environment, economic instability and cost of raw materials. 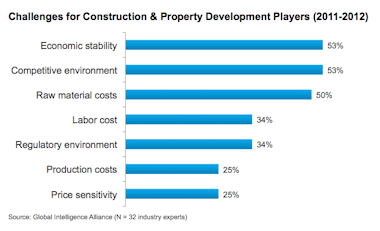 The competitive environment is of particular concern for Asian and North American companies (67% and 63% respondents respectively) as compared with Europe (44%).

Conversely, North America and European companies (61% and 63% respondents respectively) ranked economic instability more highly as a potential threat than their Asian counterparts (17%). Cost of production and government regulations were more than twice as widely mentioned by Asian respondents compared to Europe and North America.

All in all, the findings re-confirm ongoing industry developments. In spite of the economic uncertainty in mature markets, we can continue to expect the introduction of more green products and projects. With climate change, resource depletion and concerns about environmental pollution, this is welcome news.