According to M-Brain (formerly GIA)’s 2013 Global Market Intelligence Survey, in which 95 respondents from the consumer goods and retail industries responded to an online questionnaire in early 2013 that involved a total of over 1,200 respondents; 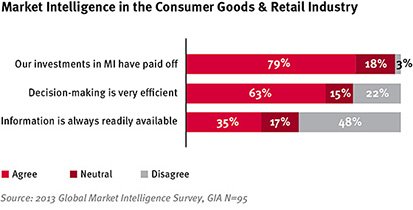 All in all, it appears that more can still be done to raise the market intelligence capabilities at consumer goods and retail companies, particularly as only 35% say that “information is always readily available”.

To rise above the competition, executives can look to how global companies with world class market intelligence have performed.