April 23, 2009. Chinese consumers spent over 500 billion US dollars in 2005. Top of their shopping lists are cars, white goods and consumer electronics, and for those who can afford to move to new homes, new furniture and fixtures.

China is considered a key area for growth by international retailers, many of whom have been stepping up their expansion plans in the hope of capturing a bigger share of growing consumer spending. 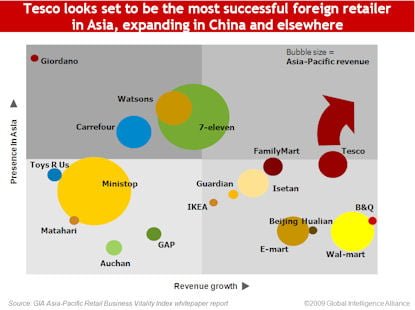 Tesco, which has seen much success with a careful expansion strategy into selected Asian markets, plans 12 more outlets in China by 2007, and a move into India.

Home improvement store B&Q is perhaps the boldest of all, aiming to have 100 more stores in China by 2010. IKEA has announced it will open another 10 stores in China in the next six years.

Food retailers are just as aggressive. Carrefour, currently the biggest foreign food retailer in China with 79 stores in 32 cities, is scheduled to open another 20 more in 2006.

Walmart has similar plans, intending to open at least 18 new stores in China in 2006. In May 2006, Walmart withdrew from South Korea to focus resources on the more profitable Chinese market.

While foreign players continue to push for more growth in China, local competition and local customisation of products and services will remain key challenges.