Geothermal Energy in Indonesia Heating Up

June 28, 2012. As an emerging economy and the world's fourth most populous country, Indonesia's need for energy is tremendous. Based on the 2010 Energy Outlook report released by Indonesia's BPPT (Agency for the Assessment and Application of Technology), Indonesia is expected to become a net importer of energy by 2030 because by then it will no longer be able to meet demand domestically.

As world events have driven oil prices to unprecedented high levels in recent years, it is challenging for the Government of Indonesia to rely long term on this expensive and limited resource that continually puts a strain on the economy. Therefore, Indonesia is on a mission to explore all sources of renewable energy that it is endowed with.

Only 4.5% of Indonesia’s energy needs were met by renewable sources in 2006. However, in the same year, the government launched a presidential decree with a bold plan to raise the percentage to 17% by 2025, in line with the Millennium Development Goals. Further, in 2009, vision 25/25 (Visi 25/25) was announced as a step up to the 2006 decree, raising the bar to 25% and signalling the republic’s determination to ensure that Independent Power Producers (IPPs) would be attracted to invest in renewable energy. 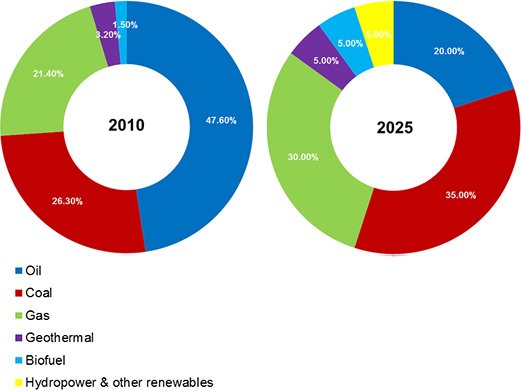 Unlike many other countries, where solar and wind are front-runners in the race to renewables, among the renewable energy sources that Indonesia seeks to exploit, geothermal may promise the brightest future. Indonesia has been heralded as having the world’s largest geothermal power potential with 28 gigawatts or about 40% of currently known global geothermal sources (i.e. underground natural heat sources). This potential has started to attract investment. Global players such as Marubeni, GDF Suez, Tata Power, Origin Energy and Panax Geothermal have been involved in various consortiums set up to develop this potential.

With abundant potential and large demand, geothermal may prove to be an opportunity not to be missed. Some of the key factors to be considered by companies interested in tapping into geothermal in Indonesia include: