September 13, 2012. Financial services companies are extending their global ambitions, expecting to double their total share of global revenues from emerging markets to about 30% by 2017, according to recent research by M-Brain (formerly Global Intelligence Alliance) . The industry will continue to focus on China, India and Brazil as their top emerging markets - with Russia, Indonesia and South Africa coming up next as important secondary emerging markets, according to M-Brain (formerly GIA)’s Business Perspectives on Emerging Markets 2012-2017 Report.

Emerging markets now account for more than half of global profits at the world’s 15 largest banks, and it is a race to reach more customers. Access to customers is the top success factor in emerging markets said the 41 financial services respondents in M-Brain (formerly GIA)’s survey. Adopting banking technology will help.

Mexico for instance, has one of the five largest GDP/per capita ratios in Latin America, but the penetration rate of financial institutions is a mere 10% according to a 2009 World Bank survey. Less than half of the population has a bank account. In 2011, BBVA-Bancomer, one of Mexico’s largest banks, used online and mobile banking to increase its credit-related client base by 21% by adapting quickly to local market conditions and capitalized on a government law requiring all companies to file taxes online.

Other key success factors include good government relations, strong local partners with the right connections, as well as ensuring high product and service quality. Having an appetite for risk is another. Investing in Indonesia will certainly require a stomach for risk. The regulatory system is still in its infancy and corruption persists. But it is the fourth most populous country in the world and over half of the population has mobile phone subscriptions. The potential for financial services companies to provide mobile payment services is huge. With only 20% of the population holding any bank account and with rising income levels, growth potential is high for all financial sectors, from insurers to financing companies. 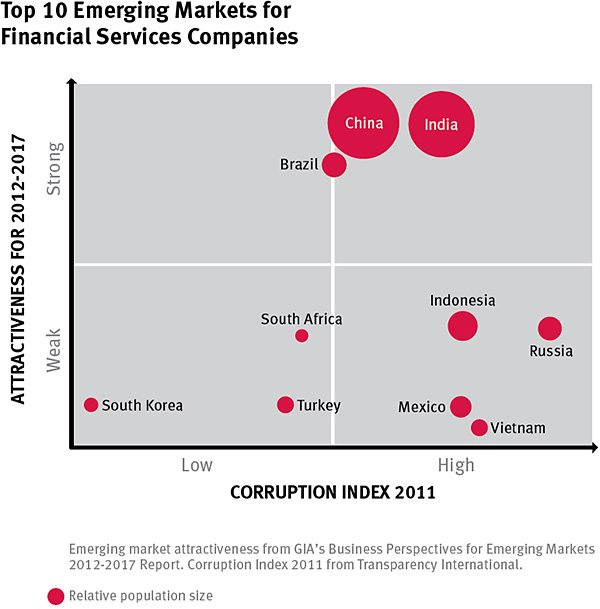 Threats to success in emerging markets are also closely tied to local governments. Respondents cited bureaucracy and red tape, the weak rule of law, regulations and taxes as well as poor infrastructure as their top threats. Interestingly, lack of local market understanding at headquarters was also a major concern. Certainly, financial services companies need to execute their mandates from their global headquarters – but not before adapting them to local market conditions.

Threats in Emerging Markets for the Financial Services Industry (2012-2017)