Select language
Contact us
Privacy
M-Adaptive
Intelligence Plaza
« Japanese Companies As Investment Partners
Manufacturing and Industrial Sector One of the Top Spenders on Market Intelligence, But Capabilities Still Trail Behind »

According to M-Brain (formerly GIA)’s 2013 Global Market Intelligence Survey, in which 45 respondents from the logistics and transportation industry responded to an online questionnaire in early 2013, about 80% say their company’s investments in market intelligence have paid off but just half think that “decision-making is very efficient”. 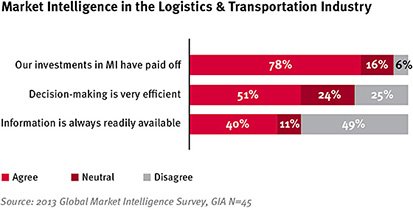 All in all, it appears that more can still be done to raise the market intelligence capabilities at logistics and transportation companies, particularly when the industry results are compared with automotive players for example. While the availability of information appears to be about the same in both groups, a much larger proportion of auto executives say that their investments in market investments have paid off (89%) and that their decision marking is efficient (79%). To rise above the competition, industry executives can look to how global companies with world class market intelligence have performed.