September 4, 2012. In the Business Perspectives on Emerging Markets 2012-2017 Report conducted by M-Brain (formerly GIA), 26 percent of manufacturing and industrial respondents said they are investing in emerging markets in order to gain a foot hold in future large markets. The reason is clear; manufacturers say they expect 41% of their global revenues to come from emerging markets by 2017.

Over the next few years to 2017, manufacturers will continue their focus on BRIC markets, with equal emphasis on Brazil, China and India and with Russia lagging behind as the fourth highest ranking target emerging market at 19 percent.

South Africa, Indonesia, Turkey, and Vietnam follow the BRIC countries as secondary emerging markets that manufacturers will focus their investment efforts on. In spite of their rising populations of middle class consumers and high growth rates, these four countries will pose challenges in the level of their production capabilities, as shown in the chart below. Other secondary emerging markets to continue to watch out for include Mexico, Poland and Thailand with their high production capabilities and longer history of foreign direct investment by large manufacturing players.

Many manufacturers have been mitigating the risks of their emerging markets strategies by developing a “˜BRIC + 1’ strategy, a hedging strategy that involves continuing operations in the BRIC location where they have established manufacturing, while opening up just one or two factories in a secondary emerging market as a hedge.

GE is one of these companies. It asserts that manufacturing prices are frequently 30% lower in secondary emerging markets than in the BRICs, but other issues frequently offset these cost increases. Another multinational giant, Unilever, has invested heavily in Indonesia. It has worked with the government and local associations and leveraged its scale of investment to develop a relationship and local support systems that will benefit the community and the company for decades to come. 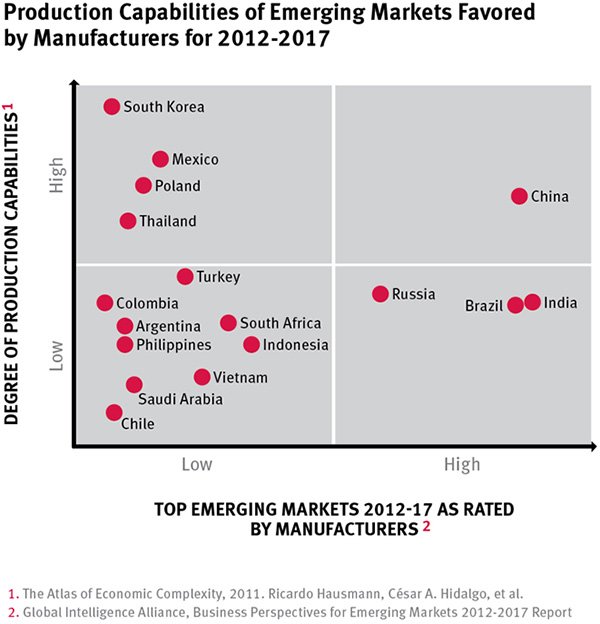 Collectively, emerging markets seem to offer the best hope for manufacturers for the future, with some estimates saying that they will still be growing at rates double those of the developed markets in 2025. Emerging markets however, do not come without a variety of success factors and threats.

Source: M-Brain (formerly Global Intelligence Alliance)’s Business Perspectives on Emerging Markets 2012-2017 Report N=80
In the Business Perspectives for Emerging Markets 2012-2017 Report, some of the most important key success factors listed by manufacturers were the [local] distribution and access to customers (41%), localization of products and services (26%) and adapting to local culture (25%). This is a distinct problem for manufacturers who are used to producing for export and are now adapting to selling their products directly in these markets.

Localization of products for emerging markets is certainly the way to go. LG Electronics found its original flat screen televisions did not satisfy the needs of a diverse range of customers in multiple markets. To become more versatile, LG adapted to produce a wider range of products at a quick rate. For China, it began producing cost effective flat screen televisions with fewer costly extras. In India, LG found that its customers also used their televisions for listening to music, so they manufactured low cost tube televisions with high quality speaker systems on them. This versatility in manufacturing allowed LG to remain competitive in emerging markets.

As for the top threats in emerging markets to 2017, manufacturers in the Business Perspectives for Emerging Markets 2012-2017 Report listed competition with local players (38%) as number one, followed by competition by foreign players (33%).

According to a separate survey, conducted by KPMG in 2011, manufacturers in emerging markets are expected to ramp up their innovation activities at an even greater rate than their developed-market rivals as they seek to compete for higher-margin business. In all 10 of the innovation activities surveyed, respondents from emerging markets were more likely to say they expected to see an increase or significant increase in activity over a 12 to 24 month horizon, in some cases by a significant margin. In the areas of radical innovation and fundamental research, for example, they were 10 percentage points and 14 percentage points ahead, respectively.

Many foreign manufacturers used to rely on their highly valued foreign brand name and reputation for quality, but their local competitors may soon beat them at the quality game as they innovate locally for their own markets.

What the future holds

Emerging markets are more complex than ever. Indeed, there are an increasing number of metrics to consider as the manufacturing industry’s complexity grows, and in the midst of a global economic reorganization, this is a good time to reassess and strategically realign. In the future, manufacturing networks will not be geographically divided into high tech versus low cost, but will reflect far greater diversity.

Successful manufacturers will need to develop a habit of asking the right questions and staying flexible in emerging markets, and a taste for risk and a tolerance for ambiguity to continue previous rates of growth. If they are to compete for higher-margin business, companies must also experiment with new ways of working. In short, global manufacturers may need to alter their business models ““ and their strategic approaches to supply chain management, market intelligence and location selection. Along the way, manufacturers will need to continuously monitor markets and competitors to better understand shifting conditions and to weigh the costs and benefits of playing in emerging markets.