Manufacturing and Industrial Sector One of the Top Spenders on Market Intelligence, But Capabilities Still Trail Behind

July 12, 2013. Companies in the global manufacturing and industrial sector will spend an average of US$3.4 million on market intelligence* in 2013, making the sector the fourth biggest spender after the healthcare, consumer and IT sectors, according to M-Brain (formerly GIA)’s 2013 Global Market Intelligence Survey.

According to M-Brain (formerly GIA)’s 2013 Global Market Intelligence Survey, in which 179 respondents from the manufacturing and industrial sector responded to an online questionnaire in early 2013 that involved a total of over 1,200 respondents; 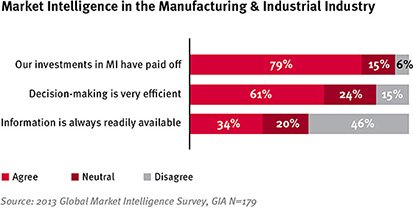 In a ranking of 20 industries in the study, the manufacturing and industrial sector ranked 14th in terms of its market intelligence capabilities. By comparison, executives in the media and entertainment sector consider their market intelligence to be very advanced, placing them number one overall, but interestingly; the perceived return on investment (ROI) in these companies is the lowest. The industry with the highest perceived ROI for market intelligence is instead in environment and renewables, where budgets are only slightly higher.

All in all, it appears that more can still be done to raise the market intelligence capabilities at manufacturing and industrial companies, particularly as only 34% say that “information is always readily available.