September 14, 2010. By the end of this year, over 60% of the entire Indian population will be classified as middle-class, according to a survey by CRISIL. Many live in India’s tier 1 and tier 2 cities, and some may earn as much as USD20,000 per year - or the equivalent of over USD100,000 per year in India when adjusted for purchasing power parity. Changing lifestyles and eating habits, an over-taxed healthcare system and a dearth of healthcare services are opening up new opportunities for the healthcare sector.

Unlike many countries with aging populations, India has a much younger population ““ and it is still growing. By 2030, India could surpass China as the world’s most populous nation. Its population is projected to reach 1.6 billion by 2050.

According to census data, there were only 290 million people living in cities in India in 2001. By 2008, there were 390 million. Forty-two of these cities had populations of over one million each.

The public healthcare infrastructure in India’s cities is severely stretched and can barely cope with such exponential growth.

India is a market that has caught the attention of personal healthcare equipment suppliers. Patients still depend heavily on medical practitioners and hospitals for medical diagnostic services but a growing number are turning to affordable and easy-to-use self-care medical devices.

With a shift towards urban lifestyles, the incidences of diabetes, cancer, chronic heart diseases and hypertension in India have increased significantly.

The International Diabetes Federation estimates that the number of diabetic patients in India more than doubled from 19 million in 1995 to 40.9 million in 2007. It is projected to increase to 69.9 million by 2025. This is due to a changing diet nationwide that is rich in fat, sugar and calories, as well as the lack of exercise and physical activity.

Foreign companies are banking on the portable devices market, sometimes by partnering with local incumbents. In 2008, Piramal Healthcare introduced a portable self-monitoring blood glucose (SMBG) system with Arkray from Japan. The device simplifies self-monitoring of blood sugar levels into three simple steps and also maintains historical readings. Other global players, Abbott, Bayer and Johnson & Johnson, also carry a large product portfolio of SMBG devices and have started to promote them in the Asia Pacific region. As the market matures, such players are expected to promote their products actively to consumers in India as well.
Other portable devices such as inhalers and nebulizers for asthmatic patients and pain management devices (e.g. TENS devices) are helping to create further potential markets.

The World Health Organization expects the number of asthma patients within urban areas in India to reach 6.6 million by 2011. Approximately 38% of these patients will be between 15 and 40 years old.

Local players such as BPL Healthcare, Infinity Mediquip and MRK Healthcare are actively improving the technology and prices of their compact nebulizers in order to capture a growing customer base in India. Foreign companies are also entering the market through partnerships with local players. In 2009, Piramal Healthcare launched ActiPatch, a drug-free bioelectronic patch for pain management developed by US based BioElectronics Corporation.

Opportunities for fitness and well-being

Urbanization drives the growth of fitness centers that in turn drives the use of simple devices such as body fat analyzers, pedometers, cholesterol meters, and digital thermometers in fitness clubs and homes.

Premium portable equipment produced by foreign players such as Omron Healthcare, FUTREX and COSMED is sold to health clubs and fitness centers through a few importers and distributors.

The health and fitness market is expected to continue to grow at an annual rate of 15% in India. Global fitness and wellness players such as Fitness First and Gold’s Gym are aggressively expanding into major Indian cities while local players like VLCC and Talwalkars have become well established.

Urbanization has another impact on India’s rural areas: a brain drain as doctors and nurses move to the cities. The lack of infrastructure and facilities has also hampered the development of medical services in rural India. Electricity may not always be reliable, transportation can be patchy and local medical practitioners may lack a breadth of experience.

Portable medical devices that run on mobile networks are one solution to such challenges. They are especially useful for roving medical units. In 2009, GE Healthcare launched MACi 400, a portable electrocardiogram in India, which is highly mobile and inexpensive to operate. Siemens and Philips are amongst few other players in the portable mobile devices market.

Which city to start with?

A recent survey by M-Brain (formerly GIA) amongst players within India’s construction and manufacturing sectors indicates that medical and healthcare facilities remain one of the top issues in many urban cities.

When asked “what challenges will urban growth pose?”, respondents from Bangalore and Jaipur said that the greatest challenge in their cities was medical facilities and services, over and above education, transport infrastructure, electrical supply, housing and water supply. 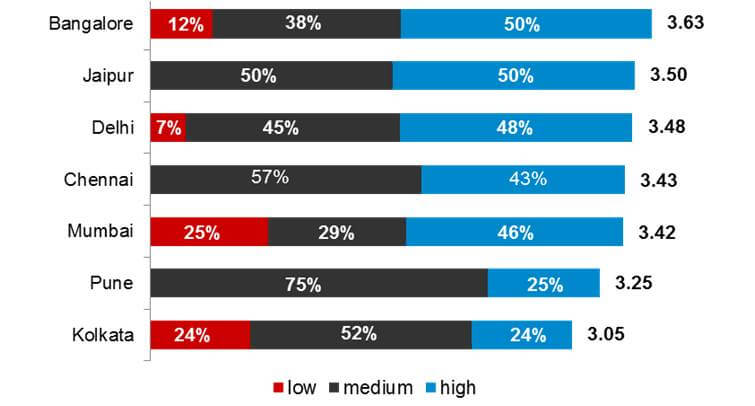 Though India presents significant potential for innovative portable healthcare devices to meet the challenges in medical facilities and services, players will have to scrutinize carefully and evaluate their own challenges ahead.