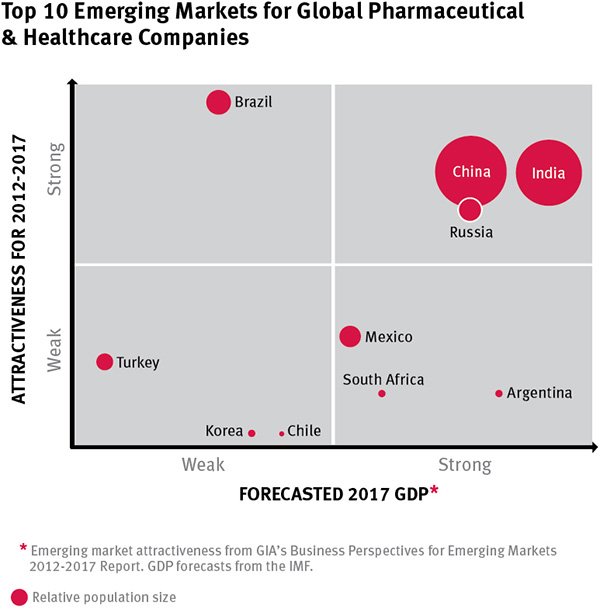 September 5, 2012. Emerging Markets will account for 26% of global revenues on average for pharmaceuticals and healthcare companies by 2017, up from 15% today, according to the Business Perspectives on Emerging Markets 2012-2017 Report (Pharmaceuticals & Healthcare) from M-Brain (formerly Global Intelligence Alliance) . Nearly 80% see emerging markets as large key customer markets and critical to their futures, with close to 40% already serving customers in emerging markets.

The 38 business managers in M-Brain (formerly GIA)’s survey said that the BRIC countries (Brazil, Russia, India and China) are still their top four most important emerging markets for 2012-2017, with Brazil the clear favorite with 90% of the votes. Mexico, Turkey, Argentina and South Africa top the list for non-BRIC emerging markets.

The landscape in emerging markets seems to be becoming more favourable for foreign players. Rising incomes, the growth of health insurance and more favorable healthcare policies have helped spur growth. China for instance, allocated US$ 41 billion for the development of new hospitals and for the refurbishment of its healthcare system in its latest Five Year Plan (2011″“2015). India’s government plans to improve the country’s current doctor-patient ratio to 1 to 1000 by 2015, an increase of 60%. India’s federal government recently announced a US$ 4.8 billion plan to provide more than half of its citizens with access to essential medicines. The federal governments in Mexico and Turkey have recently implemented new policies to extend healthcare coverage.

But many factors can still make market entry risky.

One of the largest challenges will be capturing growth in rural areas, which until now have been too fragmented to effectively enter. Global pharmaceutical and healthcare companies will also find themselves coming up against local competitors that may have the upper hand when it comes to leveraging local relationships and established procurement systems to undercut newcomers in pricing.

It could be for such reasons that the pharmaceuticals and healthcare companies in M-Brain (formerly GIA)’s Business Perspectives on Emerging Markets 2012-2017 Report say that local distribution and access to customers, pricing and localized competitive positioning are their top three success factors in emerging markets in 2012-2017.

They also said amongst their top five threats would be competition from both local and foreign companies. The heavy hand of the government is also a major threat, with corruption and weak rule of law, bureaucracy and red tape, as well as regulations and taxes being the other top five threats.

It is not difficult to see how this will be played out in reality.

Capecitabine is a publically funded drug in China that is used in the treatment of metastatic breast and rectal cancers, It has become effectively “non-reimbursable” due to lack of information and some initiatives to control public health spending on prescription therapies. Public hospitals in Shanghai no longer stock Capecitabine and the drug could be subjected to government mandated price cuts (which applies to all NRDL listed drugs), without the benefit of broadened access.

To address similar problems, Pfizer works closely with local governments to allow for tiered pricing and other flexible approaches to establishing value by considering local socioeconomics, disease areas, viable margins, and empowering local markets to make their own decisions.

In other emerging markets, government regulations and policy are designed to favor local companies. The Russian Ministry of Industry & Energy is working towards having local players provide 50% of the drugs in circulation in the Russian pharmaceuticals market by 2020.

Threats in Emerging Markets for Pharmaceuticals and Healthcare companies (2012-2017)

What the future holds

The potential emerging markets holds for the pharmaceuticals and healthcare industry is unquestionable but risks remain.

A high percentage (94%) of pharmaceuticals and healthcare companies surveyed said they would like to have done something differently in how they planned and executed their emerging markets strategy. Many would like to have made greater efforts to enter earlier, while others would have adapted better to local conditions and prices, or ensured they had better local market intelligence and due diligence. The survey also showed that availability, accuracy and completeness of intelligence on emerging markets is an issue for pharmaceuticals and healthcare companies. Nearly eight out of 10 said that such information is not readily available in their organizations while nearly 90% doubt the accuracy and completeness of the information.

Companies must be agile enough to secure an effective distribution network, navigate bureaucracies and price effectively, and invest in the market intelligence they need to stay ahead of both local and foreign competitors.