Will US$100 Million Generate High ROI for Pharmaceuticals and Healthcare Companies in Their Market Intelligence?

While this may appear substantial, they are however, not the biggest spenders. By comparison, some manufacturing and industrial companies may commit as much as US$130 million to market intelligence in a single year.

The answers can be found in M-Brain (formerly GIA)’s 2013 Global Market Intelligence Survey, where we compare two groups; companies in the biotechnology and pharmaceuticals sectors with 51 respondents and those the medical devices and healthcare sectors with 55 respondents. 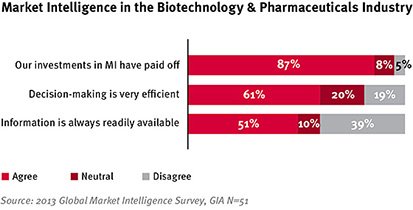 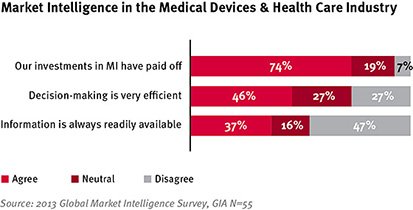 In addition, the cross industry comparisons in the study showed that executives in the media and entertainment sectors consider their market intelligence to be very advanced, placing them number one overall, but interestingly; the perceived return on investment (ROI) in these companies is the lowest. The industry with the highest perceived ROI for market intelligence is environment and renewables, where budgets are only slightly higher.

All in all, it appears that more can still be done to raise the market intelligence capabilities at biotechnology, pharmaceuticals, medical devices and healthcare companies, particularly as a large majority says that Information is not always readily available.