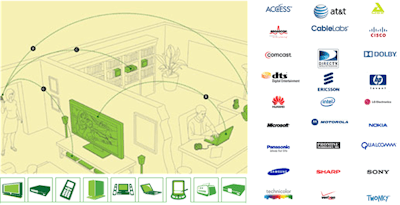 This means that devices that used to be dedicated to specific functions e.g. Blu-ray players, digital cameras, TVs and mobile phones can increasingly perform a similar variety of media programming such as video playback, photo displays, media storage, etc. Consumers in turn demand the ability to share, transfer or switch media content and playback in between different connected devices. In a typical scenario, a user may start a movie or song on one device, e.g. a smartphone, and continues viewing the same material on a larger TV screen.

Today the DLNA boasts over 200 contributor members from OEM/ODM manufacturers to cable and network operators from around the world. According to the organization, there are now more than 9,000 certified TVs, Blu-ray players, DVRs, PCs, mobile phones, printers, and other products.

For media broadcasters and content developers, this trend brings fundamental impact on how digital content should be produced to cater to new consumption patterns of the 21st century end user.

As online video streaming channels such as YouTube and Netflix continue to grow in popularity, particularly among younger viewers, 2011 marks the year when TV programmers and broadcasters are taking a serious look at the opportunities (and threats) of broadcasting online.

Early adopters include the premium tier of sports franchises such as UEFA, NFL and NBA, who enjoy global audiences that hold great demand for real-time broadcasts. The Internet provides an unmatched platform for distribution in terms of scale and speed of delivery. These vendors provide early reference cases of how to monetize online content, but new subscription models are expected to continue to emerge over time.

eMarketer, a US-based market research firm estimates annual growth of 52%, or US$740 million, to reach a sum of US$2.16 billion in online video ads in the US in 2011. While this figure remains a mere fraction of total online advertising spending (around US$31 billion), it is one of the fastest growing advertising segments and looks set to attract traditional TV advertising dollars as online viewership continues to grow exponentially.

Thanks to this trend, a suite of hardware and software vendors is quickly taking advantage of the rising opportunity.

Companies that are keen to tap online video opportunities

Trend 3: The Internet turns out to be a powerful alternative to iOS and Android for cross-terminal publishing

With the steady progress in HTML5 development and widely anticipated mobile broadband upgrades, web applications offer an increasingly viable solution for delivering digital media services across a wide range of devices and terminals. 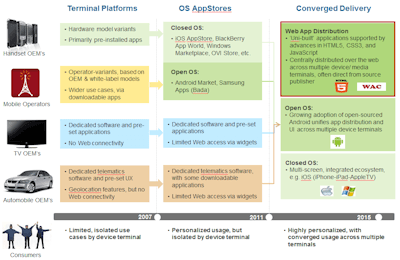 While native operating systems will continue to dominate portable device markets over the coming years, M-Brain (formerly GIA) predicts web applications will gradually gain the mindshare of content publishers who seek a centrally administered delivery platform, thanks to its relatively simplified and profitable billing models. As WiFi continues to grow as a complementary solution to 3G connectivity, consumers will also be equipped for and demand application services delivered real-time over the Internet.

Telenor of Norway projects that the key drivers behind the growth in vehicle telematics are digital services, customer relationship management (CRM) and eVehicles.

Digital services are one of the fastest growing areas in the connected car development, particularly in the area of In-Vehicle Infotainment (IVI). The demand by automotive OEMs to conduct better CRM by automating all after-sales service processes, including customer retention, spare parts, accessories and servicing, is another driver. eVehicles will be yet another driver, when the benefits in conducting remote battery checks, remote heating/ cooling, payment for charging, range control and eco-driving etc. catch on.

In-Stat Research forecasts that 35-plus million IVI systems alone will ship in 2015. ABI Research estimates the number of embedded and hybrid connected car systems to grow from 45 million units in 2011 to 2,010 million units.

Currently around 10% of all new US book sales are now digital, led by textbooks, children’s books and travel guides.

New business models (e.g. in-app payments) and “user experience” designs are emerging. The big loser could be the traditional personal computer PC. Citigroup estimates that the sale of 35 million tablets could reduce PC sales by some 11 million units in 2011.

As mobile payments continue to grow as an emerging transactional platform in developing markets, vendors such as M-PESA (Vodafone Money Transfer) have achieved as much as US$500 million worth of transactions per month in six countries including Kenya, Tanzania, Afghanistan, Fiji, and South Africa.

However, given the deep penetration of credit cards and online payment infrastructure, this trend continues to primarily affect emerging markets only.

Research firm Arthur D. Little forecast a 6% growth in emerging markets in 2011, vs 2.4% in rich countries in the same year. The firm says that in countries such as BRIC (Brazil, Russia, India, China), as many as 1 million users sign up on mobile payment platforms per week, and this number is likely to reach 290 million by 2015.

Trend 7: Interim accessory solutions will dominate until wider NFC installed handset base is in place

In spite of its widely recognized growth potential, near field communication (NFC) technologies have yet to be widely adopted by handset OEMs, perhaps due to the hesitation to incur greater bill of materials (BOM) cost before sufficient public infrastructure is in place.

The Yankee Group estimates that there are less than 5 million NFC pre-installments worldwide. This is forecast to grow significantly by 2013, thanks to rumors that NFC will become standard smartphone components in upcoming iPhone 5 and BlackBerry models.

Trend 8: Network sharing will be key to solving explosive demand

According to Cisco, VNI Mobile global mobile data traffic is forecast to grow by 26 times between 2010 and 2015. Meanwhile, 66% of total traffic will be driven by mobile video and video call consumption.

Such strong demand is placing heavy strain on current 3G networks, so carriers worldwide are adopting different approaches to bridge the increasing gap.

Among the options is the strategy of complementing existing 3G and upcoming 4G networks with additional broadband infrastructure such as ADSL/FTTH and WiFi networks. In fact, Korea Telecom expects WiFi to account for 55% of its total wireless broadband by 2015.

The Intercloud is an interconnected global “cloud of clouds” and an extension of the Internet “network of networks” on which it is based. In theory, each cloud can use the computational and storage resources of the infrastructures of other clouds. The Intercloud aims to take advantage of this as cloud-based services increasingly penetrate consumer markets and grow.

New business opportunities for cloud services providers may arise, if they manage to go beyond the theoretical framework and introduce various forms of pay-for-use. To date, the Inter-Cloud remains largely in testing at research institutes around the world (pictured below). 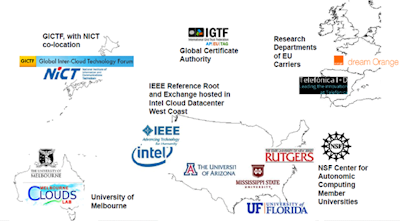 Trend 10: Growth in M2M capabilities for carriers will be driven by creative partnerships

With the growth of NFC and other short-range connectivity technologies, machine-to-machine (M2M) technologies are widely considered to be a strategic option for operators who are seeking new revenue growth opportunities.

As new uses are continuously discovered, the M2M network buildup now supports a wide range of platform and application layers, ranging from smart cities and mobile payment, to e-government services. 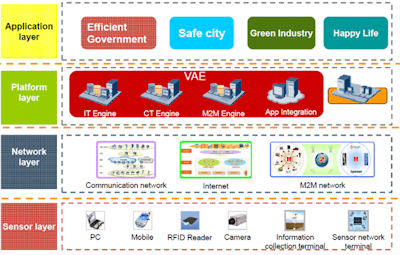 As the portable device base continues to proliferate, the M2M growth is set to create opportunities for the entire mobile service eco-system. Huawei projects the M2M market to grow from $58.2bn in 2008 to $114.2bn by 2012.

Given the pervasive impact of M2M capabilities, carriers who wish to leverage this opportunity will need to think beyond their traditional customer bases and collaborate with new technology and service segments such as connected TV, web applications, and connected vehicles.