December 10, 2009. Many technology companies still worry about competitiveness, pricing, margins but have a positive outlook and expect the need for Market Intelligence* to increase over 2010/2011. Cloud computing and social media will be the new buzzwords within the Market Intelligence space. 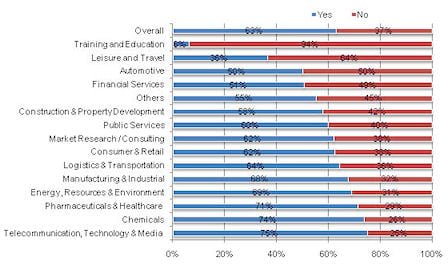 Three quarters of respondents state that they have systematic market intelligence operations in place. This is the highest percentage across all industry verticals, with chemicals (74%) and pharmaceuticals & healthcare (71%) following behind, and significantly higher than the cross-industry share of 63%.

Market intelligence staff size is usually up to five people for organizations with less than 5,000 employees, and gradually increases up to 50+ staff for really large firms with more than 10,000 employees.

Approximately half of the respondents state that the importance of the market intelligence function inside their organizations has increased significantly during the downturn.

At the same time, about half of organizations indicate that they will increase future market intelligence investments over the next two years. While this number is not as high as for other industries such as Pharmaceuticals and Healthcare or Logistics and Transportation, it is worth highlighting that the level of market intelligence sophistication is already very high within Technology, Media & Telecommunications companies.

Cloud computing and social media seen as big opportunities for Market Intelligence
Intelligence professionals at Technology, Media & Telecommunications companies have a good understanding of where the future trends in market intelligence lie.

Next to common topics such as convergence, outsourcing, efficiency improvements or innovation, there are quite a few new buzzwords in the industry.

Cloud computing and the potential impact on business, IT infrastructure as well as market intelligence systems is among them. Technology, Media & Telecommunications companies are also very interested in how to best leverage social media for marketing purposes as well as how to assess online consumer behavior faster and more accurately.

Another big topic is how to identify and capitalize on individual pockets of growth, which are much harder to find now as compared to the heydays of the IT boom in the late 90s.

Emerging markets are typically seen as the best places to divert more resources as there is higher growth potential, supported by the fact that the market intelligence sector is often not very well developed in emerging regions.

Impact of the economic downturn is not fully digested yet
Many Technology, Media & Telecommunications companies still feel there are plenty of threats concerning their industry as well as market intelligence setup and infrastructure.

Many still feel the impact on business with many customer orders/decisions being delayed or cancelled, and companies still being careful about upgrading their IT infrastructure, resulting in lengthier sales and replacement cycles.

Nevertheless, the general outlook remains positive. More than two thirds of respondents highlight there will be an increasing need for market intelligence when the economy picks up again.

* Market Intelligence or MI is the discipline where organizations systematically gather, process and analyze information from their operating environment to facilitate decision-making