« Building an Intelligence Culture to Change ‘Willing to Share’ to ‘Will Share!’: A Philips Healthcare Success Story in Integrating New Businesses and New Markets
How to Get More Out of Limited Market Intelligence Budgets »

December 6, 2011. As discretionary consumer spending is hit by unemployment and economic uncertainty, the need grows in the Consumer & Retail industry for strategies to mitigate the impact of a global economic slowdown. Traditionally pioneers in the use and application of market intelligence, it stands to reason that Consumer & Retail companies will make the best possible use of market intelligence to underpin their business strategies. But this may not be the case.

M-Brain (formerly GIA)’s latest Global Market Intelligence Survey reveals that more practitioners and intelligence users in the Consumer & Retail sector than in any other sector are dissatisfied with the benefits of their market intelligence. This brings into question the state of market intelligence within the sector, and whether it will really contribute as much as it should to helping companies weather another economic downturn.

The Global Market Intelligence Survey surveyed 50 respondents from Consumer & Retail companies in Europe and the Americas about their intelligence functions. We asked Pete Read, Senior Vice President at M-Brain (formerly GIA) for his thoughts on the findings.

What is the state of the market intelligence function in Consumer & Retail companies?

“The Market Intelligence (a.k.a. Market Research) function in most large Consumer & Retail companies is very well-established. For a start, they have larger teams than in other industries. 53% of companies in the survey have five or more people in MI and a quarter have more than 20 people. Comparable figures for industrial companies are 36% and 8% respectively.

Source: 2011 Global Market Intelligence Survey by M-Brain (formerly GIA)
*Please click on image to enlarge
MI teams in Consumer & Retail companies also have a close working relationship with their CEOs, which should allow them to influence strategy formulation. In fact they have the most direct reporting line to the CEO out of all industries covered in the report. 23% report directly to the CEO and 32% of companies have only one layer between the MI team and the CEO.

Teams have on average 738 internal clients, more than three times as many as in industrial companies, at 220. Conversely, internal contributors to market intelligence content are relatively less important than in other industries, reflecting the heavy need for market intelligence teams in Consumer & Retail businesses to deliver detailed insights on consumers, based on research which is often outsourced to external agencies.” 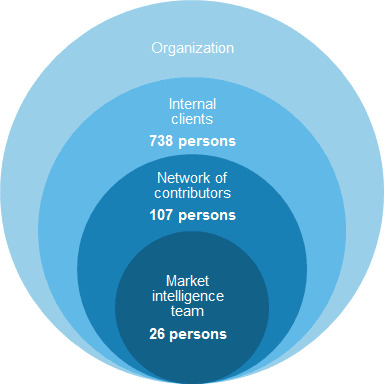 
How much do companies spend on market intelligence, and what do they deliver with this spend?

“MI budgets in Consumer & Retail companies are fairly large on average, at EUR1.7m (excluding HR costs), which is about the same as in Healthcare & Pharmaceutical companies, and smaller only than budgets in the Automotive sector (EUR2.9m).

This sizeable budget is spent on producing more regular deliverables (50% of total effort) than in more “˜industrial’ sectors, for example regular retail audit reports and longitudinal tracking studies. 84% of requests from internal clients are fulfilled by the MI team, indicating on the surface that budget is being used effectively.”

So what is the possible cause of the lower satisfaction level, and what can be done to expand the market intelligence function’s contribution to the success of Consumer & Retail companies?

“As mentioned above, even with well-established teams and efficient usage of budget, some MI practitioners and users in Consumer & Retail companies are dissatisfied with their Market Intelligence. In fact the number of dissatisfied respondents in the survey was higher than in any other sector, indicating that in some companies at least there may be a disconnect between the specification of MI and the actual needs of those trying to use the intelligence to inform their decision-making. The deliverables produced, therefore, are not always helpful to the business.

Source: 2011 Global Market Intelligence Survey by M-Brain (formerly GIA)
*Please click on image to enlarge
One possible cause of this is the fatigue and lack of relevancy associated with a traditional “˜market research’ approach focusing only on gathering consumer insights, as opposed to the more holistic, multi-source, consultative approach increasingly being adopted by more forward-thinking companies.

The good news is that more companies in Customers & Retail (61%) than in any other sector strongly agree that their company has benefitted from MI, showing that when the approach is right, the results are advantageous and make a clear difference to the business.

The increasing popularity of online shopping and tremendous influence from social media affecting consumer behavior are just two examples of recent trends affecting the Consumer & Retail industry. The Market Intelligence function must be ready and willing to explore different and innovative approaches that take into account such new market trends, so it can continue in its long-established role as a key contributor to successful business strategies.”

« Building an Intelligence Culture to Change ‘Willing to Share’ to ‘Will Share!’: A Philips Healthcare Success Story in Integrating New Businesses and New Markets
How to Get More Out of Limited Market Intelligence Budgets »
Contact Your Local M-Brain Office »