September 6, 2012. Technology, Media & Telecommunications companies expect emerging markets to account for nearly 50% of their global revenues by 2017 on average, according to the Business Perspectives on Emerging Markets 2012-2017 Report (Telecommunications, Technology & Media) by M-Brain (formerly Global Intelligence Alliance) . Their focus will be on BRIC countries, starting with India and Brazil and then by China and Russia respectively, and followed by secondary emerging markets such as Indonesia, Mexico, South Africa and Vietnam.

Seven out of 10 telecommunications, technology, and media players intend to gain global market share by competing in emerging markets. Today, just 12% say they are there to capture lower production costs, while about one-third is being pushed into emerging markets by the lack of growth or profit in more established markets.

Looking ahead, emerging economies will continue to ramp up demand for technology to fuel growth, unburdened by legacy systems. Emerging market companies plan to increase expenditure on cloud computing by 41% until 2017, compared to 30% of their developed world counterparts, as shown by Oxford Economics research. Senior executives across a number of industries from the emerging world also plan to outspend their developed market peers in mobile technology by 20%. 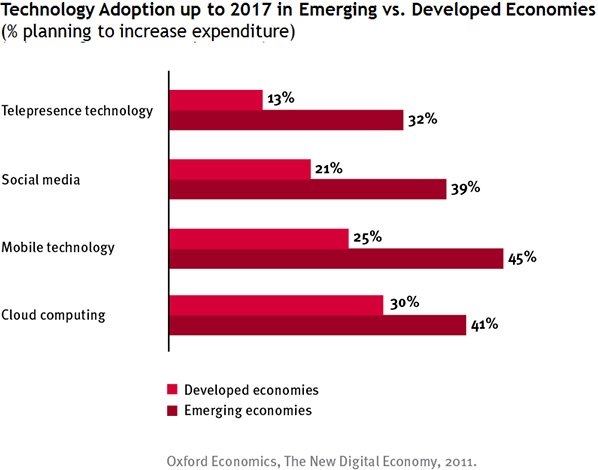 To capture the higher growth in emerging markets, the 58 telecommunications, technology, and media executives in M-Brain (formerly GIA)’s survey say that many factors will need to be managed well in order to win over new consumers. Unlike other industries which selected two to three top success factors, technology companies find that they need to simultaneously juggle quite a number as top priority. These range from distribution and access to customers, pricing, flexibility to market changes and building strong brands, to adapting to local culture, localized product and services or competitive positioning.

As for the biggest threats to success in emerging markets, respondents to M-Brain (formerly GIA)’s survey say that bureaucracy and red tape would be number one. Corruption is the second biggest threat. In Indonesia and many other emerging markets, overlapping legislative bodies lead to delays and leave markets vulnerable to corruption. As global players continue to prod officials, regulations are begging to solidify. In 2011, despite weak foreign ownership legislation, Singapore’s SingTel was able to secure and maintain a 67% stake in Telkomsel, an Indonesian telecom leader. This controlling share allowance signals regulators are increasingly open to foreign investment, albeit it cautiously.

Threats in Emerging Markets for Telecommunications, Technology, and Media industry (2012-2017)

As local technology infrastructures advance, competition and regulation will also increase – making capturing emerging markets even more complicated for telecommunications, technology, and media companies. Indeed, over 90% of the respondents in M-Brain (formerly GIA)’s survey say that they would have done something differently in how they planned and executed their emerging markets strategy.

Some would like to have made greater efforts to adapt to local conditions while others would have entered earlier. A large number also say they would have ensured they had conducted better local market intelligence and due diligence.