Setting up an Intelligence Operation at Outotec

Interviewed for this case is Heikki PuustjaÌˆrvi, Vice President of Business Intelligence at Outotec, on the topic of how to set up an intelligence function from scratch.

Outotec is a global provider of process solutions, technologies and services for the mining and metallurgical industries. The company utilizes its experience and advanced process know-how by providing plants, equipment and services based mainly on proprietary technologies. Outotec works in close partnership with its customers and provides proven environmentally sound and energy saving solutions.

In October 2006, Outotec, previously named Outokumpu Technology and a leading international developer and provider of technologies for the mining and metallurgical industries, became listed in the Helsinki Stock Exchange. Until that time, the parent company Outokumpu Oyj had supplied its Technology division with Market Intelligence deliverables and tools. But in conjunction with the separation of the two organizations, Outotec found themselves in a situation where they needed to set up an own intelligence function to support their strategic planning and sales efforts.

“We suddenly found ourselves empty-handed with regards to Market Intelligence, being an independent company and no longer a subsidiary”, says Mr. Heikki PuustjaÌˆrvi, Vice President of Business Intelligence at Outotec. “It was clear from the beginning that both our strategic planning process and operative sales efforts needed to be supported by high quality intelligence content. These two areas made up the scope of our intelligence activities at the start, and they still remain at the heart of our intelligence needs”, PuustjaÌˆrvi continues.

In conjunction with Outotec’s public listing, PuustjaÌˆrvi was mandated by the company’s top management to set up an intelligence function from scratch.

PuustjaÌˆrvi, having worked on sales development previously, was not entirely new to the intelligence field, but had approached the topic from a practical user’s perspective rather than through theoretical frameworks. He went about the project by first seeking best practices from literature and colleagues in the intelligence profession.

Since Outotec wanted tangible results quickly, the decision was made to set up an intelligence software tool in the early phases. That way, the company took a pragmatic approach and started an iterative process of “continuous improvement on the go” rather than spending lengthy time periods at the planning table before launching any concrete deliverables.

By March 2007, an intelligence process had been defined for Outotec and the organization laid out that would be producing the intelligence deliverables to support sales and strategic planning. Once the intelligence software tool had been launched to its first user groups, it was all about internally marketing the newly established intelligence function. As has been illustrated in the below graph and the related table, the entire setup phase took Outotec less than six months. 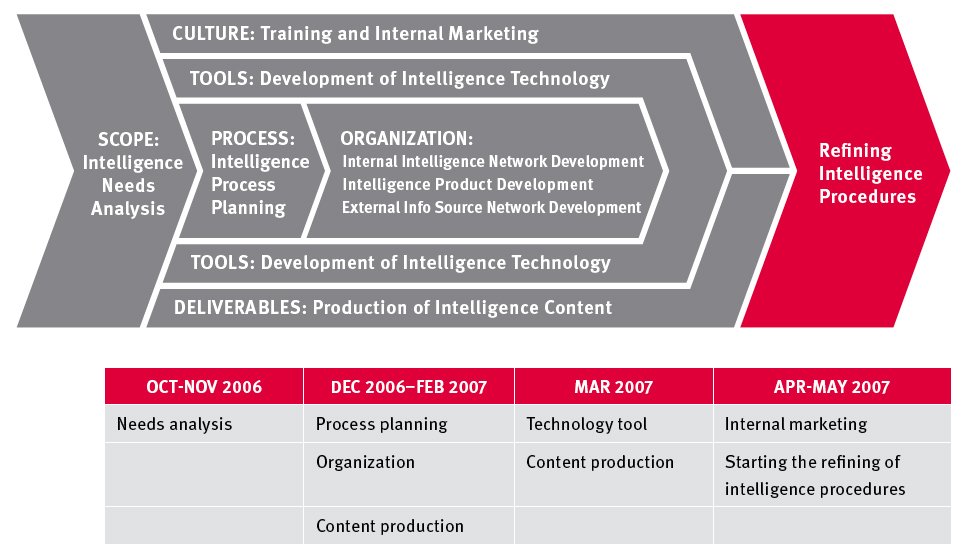 Once the intelligence function was up and running at Outotec, it was time to seek still more impact from the content that was being collected and disseminated to decision makers. Outotec launched into a scenario exercise as part of the company’s management training program.

The purpose of the scenario project was to improve strategic planning at times of uncertainty, and it resulted in an Early Warning and Opportunity System that was designed to keep the identified uncertainties and trends under radar on a continuous basis.

At the current moment, Outotec has 285 active users in its intelligence software tool. Different types of content are being delivered through the platform, such as daily market news, monthly reports, company profiles and blog monitoring.

When asked about the perceived current state of development of their intelligence operation, Heikki PuustjaÌˆrvi reflects the situation against the M-Brain (formerly GIA) world class intelligence development framework as has been illustrated in the below graph. 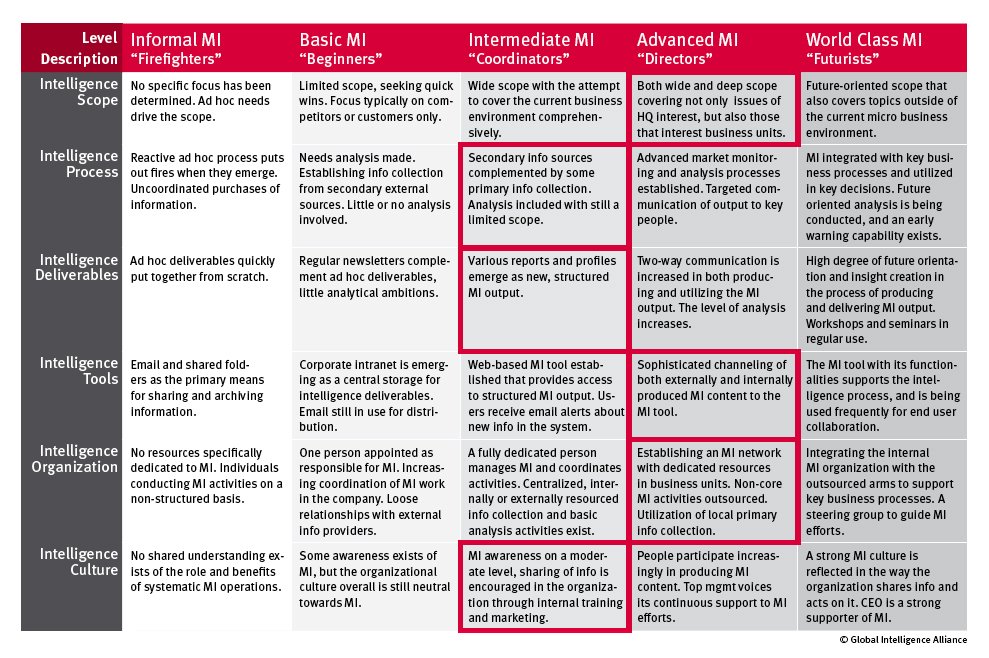 While PuustjaÌˆrvi is rather satisfied with the status of Outotec’s intelligence operation with regards to its scope, organization and tools, he sees room for improvement especially on the less tangible side, in the intelligence process flow and culture. On the other hand, PuustjaÌˆrvi calls for increasingly thorough and pointed analysis deliverables, which is something he wants to spend more time and effort on, going forward.

“Going forward, we are working on several elements in our intelligence operation to take the whole to the next level”, Heikki PuustjaÌˆrvi describes.

“For instance, we are building a process for tapping into tacit knowledge at our sales front, while simultaneously trying to raise the level of analysis of our intelligence deliverables. Organization-wise, we will be working on improving cross-division cooperation, where the challenge is that many people in the divisions only have a small part time role in the intelligence activity, but their contribution is still expected. Finally on the technical side, we are in the process of launching a new, geographical map based tool that will be linked to our intelligence software to facilitate a more visual user interface to intelligence content.”

The Need for Needs Analysis

To conclude, PuustjaÌˆrvi says what many intelligence developers have noticed over the years of working in the intelligence field: “Developing the various elements of the intelligence operation, there’s one thing that one keeps coming back to, time after time, and that’s Needs Analysis.”